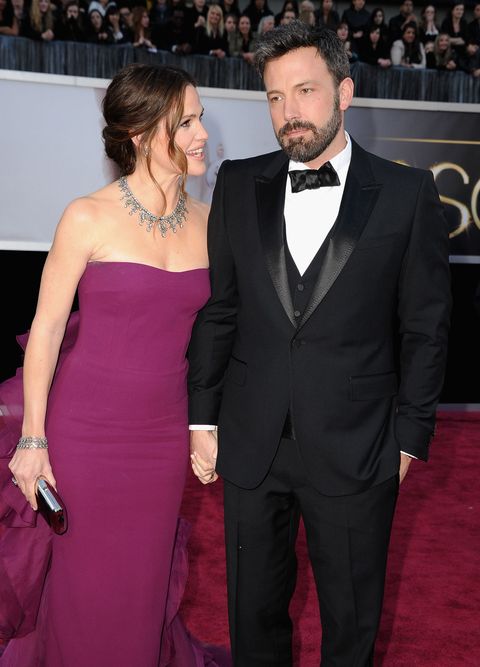 We're calling it: Summer 2015 is/soon-to-be was the worst summer for celebrity couples. First, Ben Affleck and Jennifer Garner announced their pretty amicable separation, then Kourtney Kardashian and Scott Disick called it quits, and then Blake Shelton and Miranda Lambert decided they were done. We're hurting.

As we mourn the loss of the latter two relationships, it seems the rumor mill has fixated on Affleck and Garner, and churns out a new "reason" for their split every week. That's the sad fact of the matter: When you're a high-profile A-list couple in the middle of a very high-profile divorce, the rumor mill will inevitably go into overdrive.

Here, a look at every piece of (contradictory) gossip that's hit the internet since the news broke.

1. Affleck had a thing with Blake Lively

Remember when Affleck and Lively costarred in The Town? They did, and a few paparazzi shots of them "looking cozy" off set AKA taking what seems to be a work break sparked drama that they were secretly hooking up. It's called having a platonic work wife/husband, y'all.

And then outlets starting reporting that Garner was "fed up" with Affleck's years of gambling. Okay, yes, he told Details that he knew how to count cards while playing blackjack—that just means he's skilled in acting and card games. Plus, who knows what the couples' finances entailed. We're not their accountant.

3. He was a huge party animal

Soon we heard more tales of Affleck's constant partying and wild drinking habits. In one instance, the Daily Mail said Garner had to drag him home from an Oscars party heavily intoxicated. Isn't that what we all call a Saturday night?

4. He had an affair with the nanny

Now we come to the latest "development." Us Weekly's newest issue states that Affleck is dating the couple's former nanny, 28-year-old Christine Ouzounian. The two were spotted together (as one would expect when you're talking about a father and his nanny...but a rep for Affleck shot down this "complete garbage" story. Well, that died quickly.

Kenny Thapoung Social Media Editor When I'm not stalking future-but-never-going-to-happen husbands on Facebook, you can catch me eating at one of NYC's B-rated or below dining establishments—A-rated restaurants are for basics.
This content is created and maintained by a third party, and imported onto this page to help users provide their email addresses. You may be able to find more information about this and similar content at piano.io
Advertisement - Continue Reading Below
More From Celebrity
Iconic Party Photos From the Past
The Best TV and Movie Wedding Dresses of All Time
Advertisement - Continue Reading Below
40 Celebrity Sisters Who Look So Much Alike
40 Rare Photos of Grace Kelly Through the Years
A Look at Royal Family Portraits Through the Years
The 50 Most Popular Episodes of ‘Friends,’ Ranked