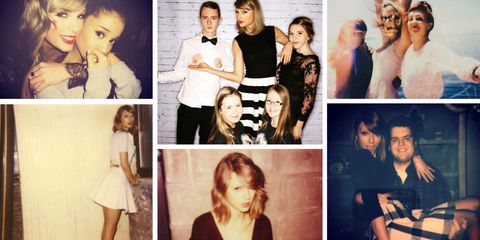 The tide might be slowly turning against Taylor Swift, but there's still a strong contingent that believes she can walk on water/raise the dead/reason with Donald Trump.

In an interview with Digital Spy, Polaroid CEO Scott Hardy credits the serial generosity demonstrator with saving the instant Polaroid camera, a commendation someone really ought to add to her Wikipedia entry.

"Taylor Swift's camp approached us and told us about her upcoming album, 1989, which was the year she was born," he said. "They said they would love to do something with Polaroid and so we did a nice collaboration effort with her, and she bundled 12 Polaroid photographs with that special-edition album."

Hardy also said he is pleased Tay Tay has introduced an old-timey technology to the Youngs, who probably had no idea what they were saying when they sang along to "Hey Ya!," if they knew about OutKast at all.

This content is imported from YouTube. You may be able to find the same content in another format, or you may be able to find more information, at their web site.
Chelsea Peng I'm Chelsea Peng, the assistant editor at MarieClaire.com.
This content is created and maintained by a third party, and imported onto this page to help users provide their email addresses. You may be able to find more information about this and similar content at piano.io
Advertisement - Continue Reading Below
More From Celebrity
The Palace Just Subtly Shaded Prince Harry
Kristin Cavallari on Why She Divorced Jay Cutler
Advertisement - Continue Reading Below
Simone Biles Shows Off Sculpted Abs In Bikini Pic
Meghan Nailed Workwear Chic in a Brown Silk Shirt
Did Emma Stone Secretly Marry Fiancé Dave McCary?
Kate Wore a Necklace in Tribute to Her Children
Meghan and Harry Made a Rare TV Appearance
Kate Middleton Wore a Playful Fall Look
Halle Berry Stuns in a Backless Swimsuit
The Best Celebrity Halloween Costumes of All Time