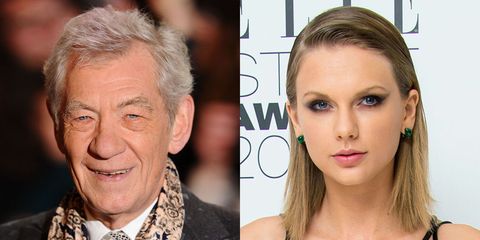 Update, 9/1: Seems one part of the Patrick Stewart-Ian McKellen duo is not really up for joining Taylor's Squad—considering she kicked him out of his apartment.

In a joke (that's kind of not a joke because it actually happened), Sir Ian McKellan says he's not a part of Taylor's famous friend group for housing reasons:

"When I was living in Peter Jackson's apartment in New York, Taylor Swift bought it while I was there and I was thrown out before I wanted to leave!" he told Gay Star News. "That hardly puts me in Taylor Swift's team, does it?"

According to the transcript he then laughed, and said: ""She bought it, she had every right to–I was just lodging there for free!"

As for why McKellen didn't join the stage with all the other celebrities, McKellen explains: "She did ask me to appear with Patrick Stewart at her show in LA, but I had something else to do that night."

Sorry, Tay. But don't worry—you've still got Patrick Stewart who seems to need no convincing.

Original story, 8/11: Sir Patrick Ian and Sir Ian McKellen are both unabashed fans of Taylor Swift—Ian most recently gave a reciting of "Blank Space" for NPR, while McKellen was shot giving a dramatic reading of "Bad Blood" for Yahoo!—and it looks like their admiration is going next-level after a Twitter love-fest, in which Taylor herself told the duo they were "Ultimate Squad Goals."

Now, McKellen and Stewart are quickly making plans to see the superstar in concert. "She's coming to town," Stewart told E!. "I think we're working on that. I mean, she's invited us into her squad!"

And *no one* turns down a Squad Invitation. Not even two knights.