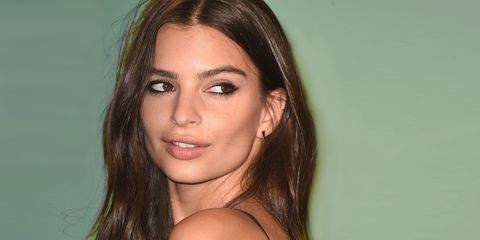 There's no denying that Emily Ratajkowski is hurts-your-eyes stunning. After landing on everyone's radar following her appearance in that unforgettable "Blurred Lines" video, and then staying there thanks to sexy spreads (hello, Sports Illustrated) and roles in Gone Girl and We Are Your Friends, the actress and model has garnered fans and followers eager to see her next move.

But the 24-year-old beauty is also intelligent and introspective, something that *is* surprising to some—even though it's 2015 and it should be quite clear by now that beauty and brains aren't mutually exclusive.

Her open-book policy when it comes to speaking out on topics like Planned Parenthood and feminism is admirable, and we got a small glimpse of her candor and insight while attending last night's Primark dinner (hosted by Refinery29) to celebrate the U.S. launch of the chain.

Wearing a crop top and a velvet skirt from the brand (which costs a whopping $11), Ratajkowski gave us the deets on presenting at the VMAs, just what she thought of Miley's outfits, and why she thinks Hollywood has a ways to go when it comes to female characters.

Marie Claire: You know, when you search your name, I gotta say—you come up a lot as a "sex symbol." What's your thought on that label?

Emily Ratajkowski: I mean, I definitely don't feel like that term or label, but it's an appreciated one, for sure. I just feel like myself.

MC: You recently presented at the VMAs alongside Rita Ora—there was so much craziness, including all those Miley outfit changes. What did you think of the show?

ER: I think it's really cool how women are taking control of how their image is being used, and sort of finding empowerment in celebrating their sexuality. And I think Miley has taken "pop star" to the ultimate level, and that's really cool and interesting. It's like performance art.

"I think it's really cool how women are taking control of how their image is being used, and sort of finding empowerment in celebrating their sexuality."

MC: You just wrapped up the press tour for We Are Your Friends, where you star alongside Zac Efron. Is there any role you're dying to take on next?

ER: I mean there's so much stuff. I really love fantasy stuff, I think that'd be really fun to do. I'm a huge Game of Thrones and Lord of the Rings person—I think that would be amazing. But really right now, after Gone Girl and We Are Your Friends, I'm really looking for complex, dynamic, interesting female characters.

MC: And do you see a lot of those types of characters in scripts that you're reading?

MC: It's no secret that you have an incredible body. Is there anything you do to keep yourself in check?

ER: It's all about yoga and hiking for me. I'm not about anything special—I don't use a trainer or anything like that. And really just eating healthy, eating balanced, knowing what is good and when you push it too far, easing up and getting back on track.

"I think that there are a lot of male writers and directors in Hollywood, and a lot of the female characters you do see are really one-dimensional."

MC: Eating balanced is definitely ideal, but what's the one thing that you break the rules for—your number-one guilty pleasure?

ER: Oh, wow. I have so many. But I love a good pastry in the morning.

MC: Now that we're heading into New York Fashion Week, what's the beauty essential you will always have on you?

ER: Moisturizer. I fly a lot, and I just got done with the tour for We Are Your Friends, and I've just been wearing a lot of makeup and running around, and it's really important to moisturize a lot.

This content is imported from YouTube. You may be able to find the same content in another format, or you may be able to find more information, at their web site.
Samantha Leal Senior Web Editor I'm Sam, the senior editor at MarieClaire.com.
This content is created and maintained by a third party, and imported onto this page to help users provide their email addresses. You may be able to find more information about this and similar content at piano.io
Advertisement - Continue Reading Below
More From Celebrity
Kaavia Talks to a Bee in an Adorable IG Video
David Harbour on Being Stepdad to Lily Allen's Kid
Advertisement - Continue Reading Below
Ben Affleck Is "Getting to Know" J.Lo's Kids
Salma Hayek's Owl Had a Mishap With Harry Styles
Princess Diana Always Dreamed in Living in Cali
Angelina Jolie Was Spotted Leaving Her Ex's Place
What Happens on Katie's Season?
Ben Affleck Had Dinner With J.Lo and Her Kids
Jessica Biel Talked "Secret COVID Baby" Phineas
Katie Holmes Paired Baggy Jeans With a White Tank