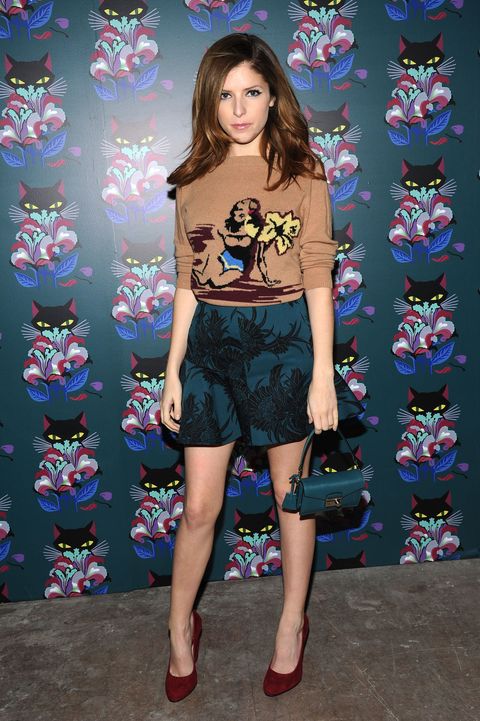 Anna Kendrick, in person, is exactly like you imagine she would be—as smart, funny, and down-to-earth-cool as your (coolest) best friend. Just as it has not gone to her head that she was nominated for an Oscar at age 24, or that she's co-starred with the likes of George Clooney and Meryl Streep, or that Pitch Perfect and Pitch Perfect 2 have earned a combined $400 million at the box office, she was similarly unfazed by the hoopla and flashbulbs that erupted when she took her seat at Joseph Altuzarra's Spring 2016 show at this season's New York Fashion Week.

Here, our 10-minute chat before the start of the show.

Marie Claire: How would you describe your style? Are you a fashion girl?

Anna Kendrick: [Laughs] I feel like I exist in the polar extremes of fashion. When I'm on my own, I love a pair of jeans or sweats. But when I want to get dressed up, I kind of want to go all out!

MC: What do you love about wearing Joseph Altuzarra?

AK: I wore a black dress of his to the Pitch Perfect 2 after party and I just felt so amazing, so feminine but also really strong. I think he's really skilled at that.

AK: Kay Cannon [screenwriter] just started writing the script about two weeks ago. No one has spoken to her in those two weeks, so no one knows anything except for her!

MC: One of my favorites of your films is the indie Drinking Buddies. Do you plan on reuniting with director Joe Swanberg again?

AK: Definitely! I actually spoke to Joe on the phone last night, just to catch up with him personally. He just had a baby. We're both really excited about working together for a long, long time to come.

MC: You also were directed by John Krasinksi recently in The Hollars.

AK: He's so incredible, he's so warm. What a great director.

MC: Is he as funny a director as he is in real life?

MC: What other films can we look forward to?

AK: I filmed The Accountant with Ben Affleck and Table 19, directed by Jeffrey Blitz. The Duplass brothers wrote it. Jeff and I made Rocket Science together when I was 19 so it's our ten year anniversary of working together. I also just finished a film called Mike and Dave Need Wedding Dates, so I am probably not going to make another movie this fall. But never say never.

MC: There have been engagement rumors since you were photographed with a sizeable ring on your left hand recently. Are you actually engaged?

AK: No, it's not even a diamond ring! [laughs] Costume jewelry!