Update, 9/25: Keep going! Keep going! In the newest installment of Jimmy Kimmel's Mean Tweets, Tobey Maguire, Naomi Watts, Halle Berry, and Mr. George Clooney himself got in on the fun/rudeness spree by reading more insults in less than 140 characters. While Halle Berry's response takes the cake (it's about her boobs, and it's amazing), George Clooney's face kind of says it all.

Watch the full compilation of the week below (and skip to 3:24 if you're pressed for time):

Update, 9/24: Up next? Emily Blunt, Salma Hayek, Jack Black, and Andrew Garfield—who, by the way, cannot stop laughing throughout his tweet. (It has something to do with his appearance.) We'll let you watch to see the hilarity firsthand:

Update, 9/23: Benedict Cumberbatch isn't the only one to know the art of response to a mean tweet. As part of Mean Tweet Week on Jimmy Kimmel, three stars went ahead and read the insults given to them by random strangers on the internet: Dwayne "The Rock" Johnson, Bette Midler, and Liam Neeson. The Butter Face tweet is definitely a favorite.

Original story, 9/22: Not many of us have spent quality time with the part of the feline anatomy named on Jimmy Kimmel last night, but one does not need firsthand experience with that end of a cat to know that the below tweet was meant as an insult to Benedict Cumberbatch's appearance.

The new dad and unabashed fan of concealer participated in Kimmel's wildly popular "Celebrities Read Mean Tweets" segment, which has been stretched into an entire week of famous people responding to uncomplimentary things we normals have written about them on the internet. So what was Cumberbatch's comeback? Let's just say, it was flawless.

"Well, someone did, and she put a ring on it," he said, sticking his wedding-banded finger up in an obscene manner. Watch the video here. 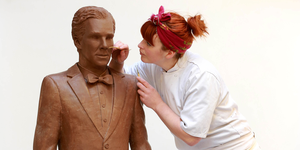