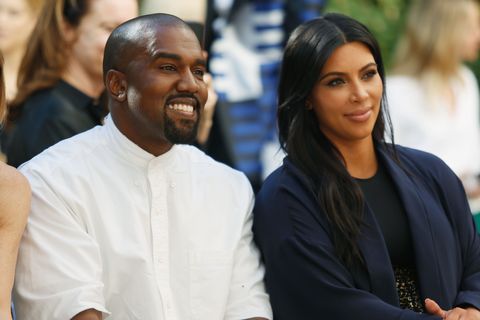 Update, 11/3: Kim Kardashian isn't over her birthday party thrown by hubby Kanye juuuust yet. In fact, she released some more photos and info on her website—including a photo of a *very* surprised KiKi and a picture of the fam, along with Tyga. Good times, good times.

Original story, 10/22: Pregnant KiKi has written an open letter documenting the uncomfortable, diaper-ridden miracle of childbirth, so Kanye went and threw her a pregnancy-themed 35th birthday to make her feel better. OR DID HE?

Following Kanye logic, if everybody's pregnant, no one's pregnant, so at the door of the Westlake Village movie theater he rented out so they could screen Steve Jobs (so loving and paternal, that Steve Jobs), prosthetic bellies were given out to guests ordered to dress in their favorite Kim maternity look. I could not make this up.

I wasn't expecting to look this way again quite yet, but Happy Pregnant Birthday @kimkardashian !! 🎥👼🏼🎂🎁

Churros and a three-tier "Happy Pregnant Birthday Kim" cake were served. Cheetos Puffs were not, which seems like a massive oversight on Ye's part.

My husband never ceases the amaze me! He rented out the entire movie theater to screen the new Steve Jobs (It's sooooo good BTW) and had all of my family & close friends come dressed up as their best pregnant Kim look (fake baby bumps provided on arrival!) Not sure if that was to make me feel less huge or just a fun cool theme but I loved it & had the best time ever, feeling so very comfortable eating churros with a bunch of pregnant women! Just what I needed, the perfect chill yummy food birthday!!!!

Kris Jenner, Kourtney Kardashian, Caitlyn Jenner, Kendall Jenner, Kylie Jenner, and Tyga were in attendance. Khloé opted to stay by still-husband Lamar Odom's side but added to the chorus of throwback Kim pics and well wishes.

Happy birthday Keeks!! 🎂 I pray you know how loved and dope you are!!! You continuously amaze me by how you do it all. Thank you for always being there for everyone! Today is about you!!! Enjoy it Mrs West!!! I love you, My bestie, my sister, my rider! ❤️❤️❤️

Happy Birthday my beautiful angel girl!!!!! You are the most amazing daughter, wife, sister, Mother, ROOM MATE, and best friend. God has blessed me with you and it has been the most wonderful 35 years. I love you beyond words......Mommy ❤️❤️🙏🙏👼🏻👼🏻👯🎂

She has been my partner for life. We always seem to end up on the craziest adventures together. I love and admire the person you have become and learn from you every day. Happy Birthday! 🎉🎂🎁