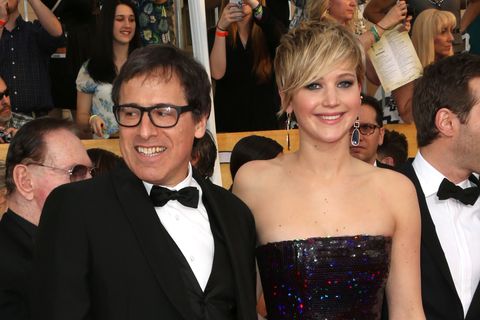 So far, three types of celebrity responses to Jennifer Lawrence's pay-gap essay have emerged. You've got the Emmas, Hillarys, Jessicas, and Elizabeths in one corner partying with Bradley Cooper. You've got Jeremy Renner going "I believe in equal pay, but I'm not going to do anything about it." And then you've got American Hustle director David O. Russell waffling in the middle saying a bunch of nice-sounding, hollow words.

In an interview with the Hollywood Reporter, Russell convolutedly congratulates Lawrence for "saying [what] is truthful to her heart" while defending the infrastructure that compelled her to write the critical op-ed in the first place.

"I understand what she's saying, and I think people in the business do too," he said. "And I also understand people saying, 'Well, let's talk about the minutiae of the deal.' It's hard to make a movie come together with a lot of big stars. American Hustle had a lot of big stars in it. We all contributed to help make it happen…But I also respect that Jennifer is finding her voice, and I think it's in service of something very important."

U wot, m8? Translation: "I respect her but not enough to stick my neck out to change anything." So he's standing with Jeremy after all. What a bummer.