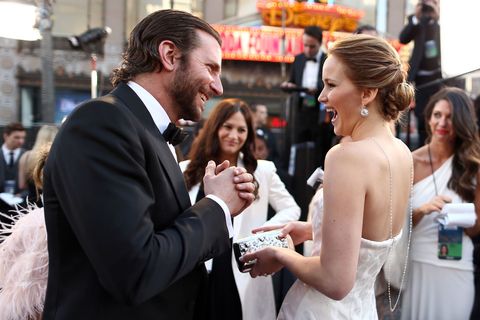 Wage inequality in Hollywood has been the hot topic of the week following Jennifer Lawrence's explosive essay on the issue, titled "Why Do I Make Less Than My Male Co-Stars?" Among the actress's most enthusiastic celebrity advocates were Emma Watson, Elizabeth Banks, Hillary Clinton, and of course, her co-star multiple times over Bradley Cooper.

To support Lawrence's efforts—and those of all his female co-stars—Cooper is planning to take preemptive action by leveraging his own salary in favor of theirs for all films he's considering. According to Reuters, the actor "has begun teaming up with female co-stars to negotiate salaries before any film he is interested in working on goes into production."

"Usually you don't talk about the financial stuff, you have people. But you know what? It's time to start doing that," Cooper added. "That's something that I could do."

Sarah Lindig Senior Digital Editor, Special Projects Sarah Lindig is the senior digital editor, overseeing special projects for Harper's Bazaar.
This content is created and maintained by a third party, and imported onto this page to help users provide their email addresses. You may be able to find more information about this and similar content at piano.io
Advertisement - Continue Reading Below
More From Celebrity
Why Is the Royal Family Called "The Firm?"
Meghan Says Palace Is “Perpetuating Falsehoods"
Advertisement - Continue Reading Below
Twitter Blasts Media's Targeting of Duchess Meghan
Palace Is Looking Into Meghan Bullying Allegations
Meghan & Eugenie Are Still Close After Royal Exit
Harry's Oprah Interview Suit Is a Nod to Archie
Ryan Seacrest's Relationship History, Explained
Angie Sells Painting from Brad for $11.5 Million
Meghan and Harry Blame the Palace for New Article
Serena Williams & Daughter Pose for First Campaign