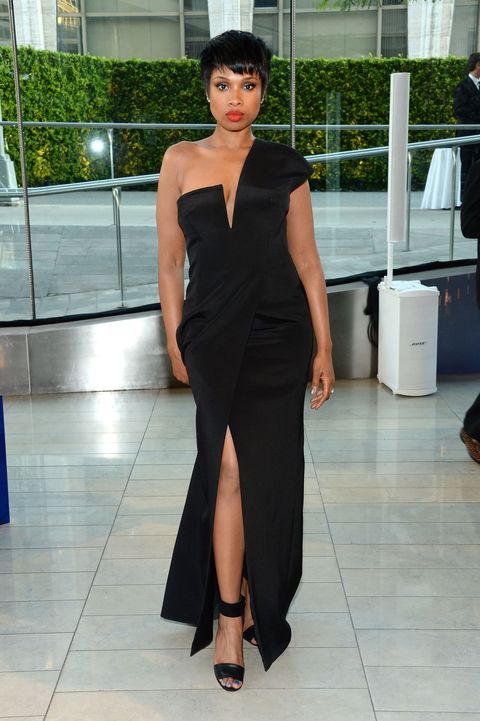 Jennifer Hudson struggled with her latest role. Starring in Spike Lee's Chi-Raq, a film that tackles gun violence, Hudson grappled with her character and even the decision to take the part, as the issue is a personal one for her—she lost her mother, brother, and nephew after they were shot and killed in their hometown of Chicago.

"This is reality for me. This is my life. A part of my life. And I definitely had that moment of like, 'Are you serious?'" the star told W magazine of considering the role. "But when I really thought about it, I understood why he came to me and I thought, 'You know what? It's worth me telling my story so that hopefully no one else has a story like this to tell.' The film we're doing is trying to save my city, as my mother said, take care of home. So for that reason I was like, 'Okay, I get it, it's worth doing.' But I don't think it's anything I will ever, ever revisit again."

During filming—as more and more horrific shootings occurred across the country—Lee would write certain instances into the script. And, according to Hudson, it made her pause to reflect on art imitating life. "If we didn't have these issues, I don't think a movie like that would have needed to be made. That's the point of making it, to make people pay attention and say, 'Guys, we have to start somewhere.' And it's not just the city of Chicago. It's everywhere. It's a bad time right now, no matter where we look. Kids can't go to school, people can't go to church, you can't go to the movies. It's like, what are we doing to ourselves? What's happening? We're acting like animals," she said.

And she's not the only celebrity choosing to speak out. Stars like Jennifer Aniston, Amy Schumer, Sofia Vergara, Kevin Bacon, and more have joined President Obama in a national PSA following the San Bernardino shootings titled "We Can End Gun Violence." The video encourages you to add your own voice—and write to your local and state officials.

"It's unfortunate that things are this way," Hudson continued, "but it's not going to change unless we do something about it."

Samantha Leal Senior Web Editor I'm Sam, the senior editor at MarieClaire.com.
This content is created and maintained by a third party, and imported onto this page to help users provide their email addresses. You may be able to find more information about this and similar content at piano.io
Advertisement - Continue Reading Below
More From Celebrity
The 6 Most Expensive Royal Wedding Dresses
Inside Kitty Spencer's Stunning £19 Million Home
Advertisement - Continue Reading Below
Meghan Was Hit With Thousands of Vile Comments
Watch Meghan's Candid 2013 Larry King Interview
Kate & William Are "Besotted" with Their New Puppy
J.Lo Re-creates "Love Don't Cost a Thing" Video
Meghan Markle Made Prince Harry a Better Man
See a Rare Portrait of Princess Diana's Mother
Kelly Ripa's Husband Left Her a NSFW Comment
Jennifer Lopez on Learning to Love Herself