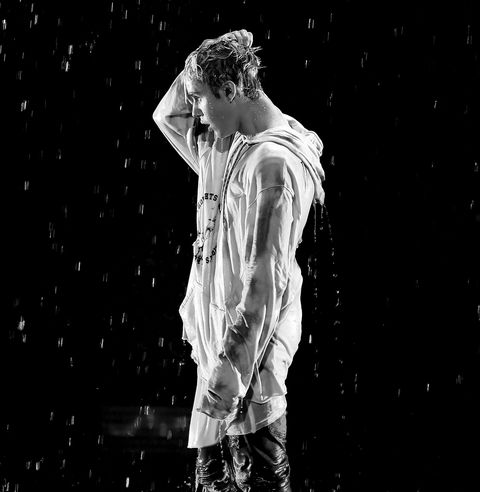 The short story is that Justin Bieber got baptized in the New York City bathtub of a former Knicks player named Tyson Chandler.

The long story, according to a new GQ feature, is that last year, when Justin Bieber had reached peak Justin Bieber (you know, egging people's houses, committing other human-rights violations, etc.), he and his family moved in with Pastor Carl, the lead pastor of celeb-fave mega-church Hillsong NYC. As GQ eloquently puts it: "It is helpful to think of Justin Bieber here, at this point in his life, as a biblical character at the very bottom of a Jobian well of his own making."

So anyways, Biebs hits a breaking point and decides he needs to get baptized—and STAT. Like, right now. Today. Thankfully Pastor Carl knew just the place: Tyson Chandler's fancy apartment on the Upper West Side, which had a pool.

But—because no great Biblical story is wanting for twists and turns—the pool had already been closed. (Cue dark and stormy weather outside for effect.) BUT! Chandler's bathtub was custom-built (reminder: He is a 7-foot-tall basketball player) and so a very emotional Biebs hopped in and came out reborn. At least, until his DUI arrest later that month.

Rosa Heyman Deputy Editor As Cosmopolitan’s deputy editor, Rosa Heyman oversees a team of whip-smart editors and hilarious writers who bring you some of the best investigations on the internet, from dissecting the latest Kardashian drama to uncovering the link between white supremacy and misogyny.
This content is created and maintained by a third party, and imported onto this page to help users provide their email addresses. You may be able to find more information about this and similar content at piano.io
Advertisement - Continue Reading Below
More From Celebrity
Simone Biles Is Honored With Her Own GOAT Emoji
Kate Winslet Reveals Her Favorite Red Carpet Look
Advertisement - Continue Reading Below
Margot Robbie Had a Life-Size Cutout of John Cena
Jennifer Lopez and Ben Affleck Are IG Official
Celebs Share Their Emotional Infertility Stories
14 Candid, Unseen Photos of the Royal Family
Rare Photos From Diana and Charles' Wedding
Ariana's Former Home Has an IMAX in the Building
Cardi B Stunned in a Cherry Red Mugler Dress
Kate Beckinsale Reveals She's Never Been on a Date