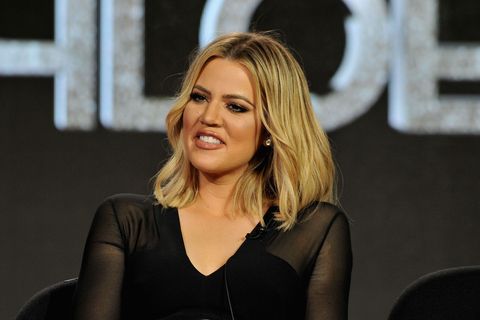 In a website musing flawlessly sub-titled "Just the Tip," Khloé Kardashian chronicles the wildest places she's had sex. "I'm not out there getting freaky in the craziest places," she says, "but I've had my fair share of chasing a thrill." #WordsToLiveBy

So, where has Khloé enjoyed the Humpty Hump, as hit '90s band Digital Underground would say? First up, on a plane—but only when other people on board, because otherwise it's total amateur hour. "Doing it on a private plane is great, especially when there are other passengers on board," Khloé writes. "I walked into the bathroom first and then he followed so it wasn't exactly stealth, haha!!! Everyone obviously knew what was going on in and when I walked out, they asked if we had fun, LOL!!!

Khloé, lover of exclamation marks, has also had sex in a moving car—though she doesn't recommend it. "I'm a tall girl so it feels cramped and it hurts my f--king knees," she explains. "Getting down in a moving car is a waste of time, because nothing happens for me. I just don't get to the finish line!"

Finally, Khloé suggests getting intimate on a kitchen counter, a place where most people make food. "You're at home, so it's comfortable, but it's still a little different than the norm," she says. "A marble kitchen counter is sexy, thrilling...and cold, LOL!"

All of this sounds fabulous, but a few notes: 1) clean your kitchen before and after consummating your love, 2) try not to get arrested for public intercourse while joining the mile high club, 3) don't sex and drive.

Mehera Bonner Contributor Mehera Bonner is a news writer who focuses on celebrities and royals—follow her on Instagram.
This content is created and maintained by a third party, and imported onto this page to help users provide their email addresses. You may be able to find more information about this and similar content at piano.io
Advertisement - Continue Reading Below
More From Celebrity
Blake Lively Reacts to Gossip Girl's Identity
Harry Said He Didn't Understand Unconscious Bias
Advertisement - Continue Reading Below
Joe Jonas Took a Stroll With Daughter Willa
Lizzo Stuns With Bright Red Hair and Bangs
William and Kate Are Hiring a Live-In Staff Member
Gigi Hadid Says She Voted With Her BB
Will Asked His Uncle to Talk to Harry About Meghan
Why the Queen Denied Meghan's Wedding Tiara Pick
Will & Harry's Reactions to Their Parents' Divorce
LOL, Kelly Ripa Comments on Her Hubby's Bulge 🍆