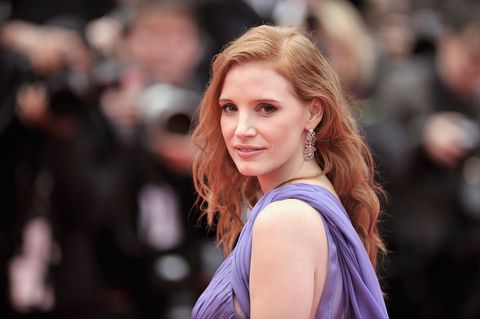 Those of us whose names aren't Donald Trump can probably agree that sexism sucks, but women are still persistently pitted against each other in the media—even by people who claim to be feminists. It's weird, wrong, and in the words of Jessica Chastain, "has to stop."

The Oscar-nominated actress recently spoke about the invented rivalry between herself and Jennifer Lawrence, saying that it's the result of a stigma that women don't work well together.

"I remember growing up hearing this myth, that women fight when they're together and it's completely inaccurate. I've never seen it," she said. "I know also during Oscar season, [the] media—because they were trying to get headlines and get clicks—were trying to fabricate a fake rivalry between Jennifer Lawrence and myself, and I immediately came out and said this is a media myth that has to stop. The women I know are not like this and I cheer for women to succeed because I know when an actress succeeds that means there's going to be that many more roles for women because an audience is going to demand it."

Speaking of creating more roles for women, Chastain has partnered with Freida Pinto, Queen Latifah, Catherine Hardwicke, and Juliette Binoche for We Do It Together, a non-profit that's goal is to create work for women in TV and film. Major 🙌  moment for sure, and hopefully one that will go a long way in bringing women together rather than pulling them apart.