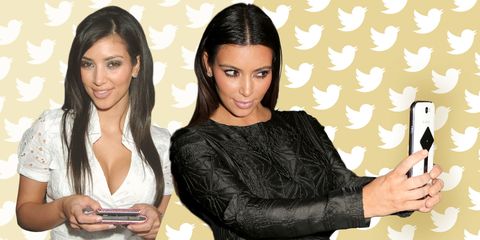 Remember when you first joined Twitter and were all like, "Is this thing on?" and probably used way too many hashtags and wrote things you wouldn't want your boss to see today and then abandoned the platform in a huff for about 7 months until you realized it was here to stay? Same.

Today, Twitter turns 10 (*take brief break to reflect on the glory that was your tenth birthday party and all that cake*) and to celebrate, we thought it would be fun to look back on what our favorite celebs were like when they first joined the platform. I mean, Justin Bieber was only 15 when he graced the world with his Original Tweet, which can only mean pure gold is waiting to be uncovered in the annals of @justinbieber.

Supreme feminist Emma Watson joined Twitter in 2010 with a warning to fans that she didn't plan to tweet often:

She couldn't have predicted that in just four short years, she would have started a massive movement *on* Twitter: #HeForShe.

Bless her heart, Cyrus circa 2011 thought she'd be using the platform only to promote her Gypsy Heart Tour for the Can't Be Tamed album.

And while she does still tweet about her music (er, kinda?)...

Cyrus now devotes a lot of Twitter real estate to raising awareness about causes that matter to her, like equality and LGBT issues:

❤️ the part of Bruce special educating people on trans terms.This is a new world so we all have new things to learn 💖 never be embarrassed!

When Kardashian joined Twitter in '09, she was dating Reggie Bush and wondering if she was too old to bling out her Blackberry (please take a minute to appreciate the reign of the Blackberry):

Now, Kardashian's tweets make headlines—see here and here and oh, here. Fun fact: when Kardashian posted this poll, it drew in twice as many voters than the 2016 Iowa GOP caucus.

We're just gonna leave you with that.

Little Biebs was only 15 when he joined Twitter in 2009 and had released this magical song:

(That would be "One Time" for all you Bieber neophytes.) Five years later, Bieber took to Twitter to break his silence after his DUI arrest.

Today, Bieber is the second-most-followed person on Twitter with 77.1 million followers.

Spears joined Twitter in 2008—the same year she lost custody of her two children and was placed under a conservatorship by her father. Now, she's back in control of her life and her Twitter account, filling up our feed with cute pics of her kids and casual photos with HRC:

This is Teigen's first tweet way back in 2009. Let's take a moment to bask in its glory:

If you know anything about anyone, you know that now Chrissy is the Queen of Twitter—a title she earned by being riotously funny, relatable, and real:

When Lovato first joined Twitter, her Disney show Sonny with a Chance had just premiered and she was wrapping up high school:

Feel weird and old? Roger that. Nowadays, Lovato is a fan favorite because of her empowering and supportive tweets:

When T-Swift sent her first Tweet in 2009, wifi on planes was a novelty (!!) and she was sending her very first International tweet:

It'd be hard to *not* know what Swift is up to these days, but thankfully there's a photo album on Twitter of her recent vacay just in case: