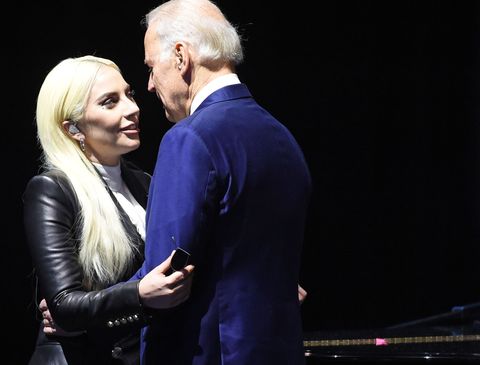 Lady Gaga waited seven years to reveal that she was raped at the age of 19. But the now 30-year-old pop star has become a vocal advocate for victims of sexual assault, even lending her talents to The Hunting Ground's Oscar-nominated song "Til It Happens to You."

Gaga is determined to make a change, and her hard work hasn't gone unnoticed by the White House. The star joined Vice President Joe Biden in Las Vegas on Thursday for a rally against sexual assault as part of the 'It's On Us' campaign, and he was quick to praise her bravery.

Gaga performed her Oscar-nominated song, and also told the crowd how they can help victims of assault. "Just take like one moment today to have compassion for something you might not understand," she said. "If you can simply be a friend to someone and truly listen, truly lend your ear, even if it's hard or you don't understand, really trying to be there with them, you will be fulfilling the sense of loneliness that has stayed with me ever since the day I was abused."