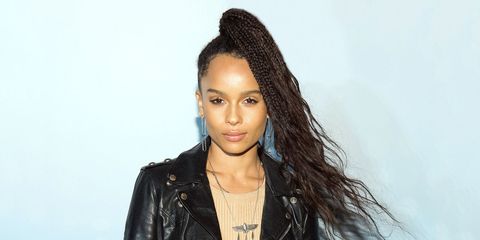 Zoë Kravitz has been busy. After a succession of high-profile movie roles last year (see: Insurgent, Mad Max: Fury Road, and Dope), Kravitz's schedule isn't exactly winding down in 2016. Allegiant, the third film in the Divergent series she's acted in since 2014, came out this spring. This summer, her electropop band Lolawolf will go on tour with stops at Bonnaroo and Lollapalooza. And she has a handful (or two, or three) more projects in the works.

Perhaps one of the most exciting: her starring role in Vincent-N-Roxxy, a love story gone wrong that premieres at the Tribeca Film Festival on April 18th. It's a movie where nearly every interaction, however seemingly benign, is imbued with violence, and where almost every character feels fiercely guarded. Yet Kravitz brings emotion, authenticity, and sometimes even humor to Roxxy, who spends different parts of the movie grieving, falling in love, and seeking retribution.

We caught up with Kravitz and got the details on the role, plus what "normal" means to her.

Marie Claire: What drew you to Vincent-N-Roxxy? It's intense!

Zoë Kravitz: I've never read a script like that before, seen a film like this before. When I was reading the script I thought it was a really beautiful love story, very sweet, very subtle, and then the last few pages just shocked me. I was confused and thought, there's no way I'm reading this right, and that intrigued me a lot. It's an interesting thing to see a story where the stereotypes get the best of you. You assume it's a man's story and it flips around in an unexpected way. It's a very refreshing thing to see and read.

MC: What was the biggest challenge in preparing to play Roxxy?

ZK: The whole thing was a challenge. Gary [Michael Schultz, the screenwriter and director] wrote such a beautiful character, and I really wanted to do it right and try to make her a real person and not this fetishized idea of a badass women. There are a lot of complex emotions going on. There's attraction and there's love and there's also fear and both characters are running from troubled pasts. Every moment is very complex. I went through the scripts moment by moment to try to make it feel real and grounded for me, because the stakes were so, so high.

MC: What do you look for in a role when considering whether or not to take it on?

ZK: I look for something that interests or intrigues me. Stories can get repetitive. Vincent-N-Roxxy is different than anything I've read before. There's so much heart in this story.

MC: You've talked about how important it is for you to be "normal" as much as possible. How does that change as you become more and more well known?

ZK: When I say that, I'm not necessarily saying normal in the sense of pretending like my life is completely normal, so I mean normal in the sense of just actively living life, whether that's a little bit to the left, a little bit to the right, a little bit different. I just mean in terms of connecting with people and talking to people and talking to strangers and walking around and getting your groceries, and still just living, I think it's really important. Even though it can be strange sometimes when people recognize you on the street, when I try to live a normal life, I don't mean to pretend it's not going on, but to participate in the world.

MC: Are you working on any projects right now you're particularly excited about?

ZK: I'm doing an HBO miniseries at the moment and it's been such a dream job. I'm having so much fun. It's called Big Little Lies with Reese Witherspoon and Laura Dern and Nicole Kidman, and our director John-Marc Vallée is a genius. I'm having so much fun, so I'm really excited for it to come out next spring. We're shooting it now.

MC: In the spirt of Tribeca, do you have any favorite restaurants or other spots in the neighborhood?

ZK: The Greenwich Hotel is beautiful, and has a great date restaurant. I really like this place called Aire that's a bathhouse and a spa, which is really really beautiful in Tribeca. And there's a really good sushi place called En that I like.