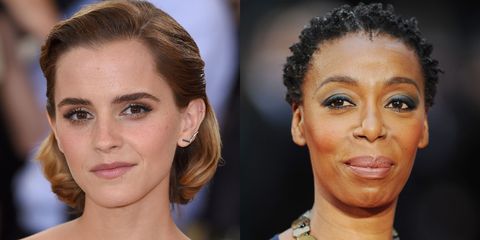 Harry Potter and the Cursed Child is here, and (as expected) black actress Noma Dumezweni absolutely slayed as Hermione. Just ask Emma Watson, who attended the June 7 performance, and was completely mind-blown. "I came in with no idea what to expect and it was AMAZING," Emma wrote on Facebook. "Some things about the play were, I think, possibly even more beautiful than the films."

Our bodies are so ready. But the best part about this whole thing is the fact that Emma met Noma back stage for a Hermione love fest. "Meeting Noma and seeing her on stage was like meeting my older self and have her tell me everything was going to be alright, which as you can imagine was immensely comforting (and emotional)!" she wrote. "The cast and crew welcomed me like I was family and Noma was everything I could ever hope she would be. She's wonderful."

We know, we know, pics or it didn't happen, so on that note:

While Noma certainly doesn't need her predecessor's approval, this moment will hopefully influence the (ahem, super racist) Harry Potter fans out there who were distressed by her casting. And while we've noted this before, it bears pointing out once again that Hermione was not written as a white character. Actually, we'll let J.K. Rowling speak for us on this one: