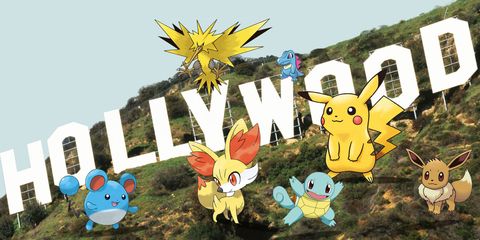 DISCLAIMER: Though it is possible that this, too, shall come to pass, the contents herein are a fictitious imagining.

Kylie Jenner stares woefully at her beauty blender and tosses it in the garbage. It's Thursday, Pokémon Go is in the world, and nothing else matters. The star swipes a manicured nail across her iPhone and gasps—Pikachu is right outside her house. Slipping into a pair of Givenchy slides, Kylie runs out the door, her Fendi pom-pom flapping enthusiastically in the wind. But suddenly, the Pokémon disappears. Kylie looks around, panicked. Her Fendi pom-pom is limp and lifeless, a true metaphor for her feelings. Suddenly she spots Justin Bieber in a tree. He's smirking and wearing overalls, a sartorial decision that Kylie can appreciate, even in this post-Pokémon reality.

"Don't say it," Kylie mutters, her Fendi pom-pom on the brink of death.

"Is it too late now to say sorry?" Justin coos. He slips his phone into his overall bib and swings away through the branches like a Canadian Tarzan.

A tear forms in the corner of Kylie's eye. "What do you mean?" she asks a nearby Bulbasaur. "When you don't want me to move. But you tell me to go." She was right—this really was the year of realizing things.

Elsewhere in Calabasas, Drake dances in a cube, still innocent to the world of Pokémon Go. But he of the perpetual internet meme feels a nagging worry: What if it's, like, cool? What if I can wear a chunky turtleneck while I play? What if RiRi's already doing it and I'm just embarrassingly late to the party? Drake reaches for his phone and calls Chrissy Teigen. She understands social media, maybe she can help.

But Chrissy is busy at her Hollywood handprint ceremony, and disaster's struck. Presidential Candidate Donald Trump, convinced a Charmander is inhabiting Chrissy's handprint square, has traveled from New York City and hurled his body into the wet cement. He's waist-deep, screaming "Gotta catch 'em all!"

Chrissy briefly considers tweeting something quippy, but shudders at the thought of Piers Morgan trolling, and decides to open her newsfeed instead. She quickly captures the Jigglypuff nestled in Donald Trump's hair before gasping at the following headlines:

Chrissy casts her eyes toward heaven. "Are you there, Beysus? It's me, Chrissy. Is Becky with the Good Hair a Pokémon, y/n?"