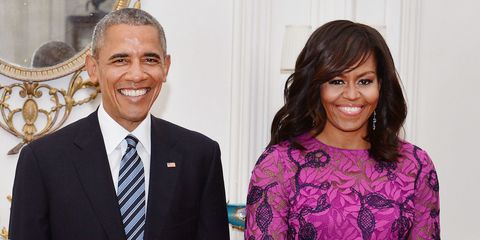 On Friday night, Michelle Obama hosted the party to end all parties in celebration of her husband Barack Obama's 55th birthday, which was on August 4. Given that the occasion was not only a milestone birthday, but the last birthday her family would celebrate in the White House, it's no wonder she went all out.

55 years young and that smile still gets me every single day. Happy birthday, Barack. I love you. -mo 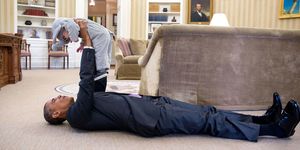 "The First Lady is hosting a 55th birthday celebration for the President at the White House," said a White House rep in a statement to People. "The guest list includes a large number of family members and friends to mark the occasion. The private event will be paid for with the family's personal funds."

The President partied it up with his family and just a few of his famous celebrity friends. And by a few we mean A LOT. According to Page Six, the lucky invitees included Beyoncé and Jay Z (obviously), Kendrick Lamar (one of POTUS' favorite rappers), Jason Wu (one of FLOTUS' favorite designers), Sarah Jessica Parker, Jennifer Hudson, John Legend, Ellen Degeneres and Portia de Rossi, Usher, Stevie Wonder, and Magic Johnson among others. The political figures expected to attend included Vice President and Obama BFF Joe Biden, Hillary Clinton, and Nancy Pelosi, to name a few.

Guests were asked not to tweet or post during the event, reports the New York Times, which of course many ignored. Not that we're complaining—that means we get a little more access to the goings-on at the exclusive soirée...

Walking to my car with Fonzworth Bentley we ran into Ellen!

Nick Jonas gushing about the event.

Tonight was a night I will never forget. #BarackObama #happybirthday

Magic Johnson and his wife Cookie getting ready for the big night...

Cookie and I getting ready to go to President Obama's birthday party! pic.twitter.com/bOTX9YwnkC

Partying with Samuel L. Jackson once they're there...

And then reminding us it was awesome and we weren't there.

Pres. @BarackObama's birthday party last night was incredible! Everybody danced all night including the First Family!

Even George Lucas was there to party down with the Prez.

Along with Reverend Al Sharpton and his wife.

Leaving the White House after the celebration of President Obama's birthday. His last birthday as President. pic.twitter.com/5al4JoxOYU

And former NBA player Grant Hill and his wife Tamia.

See some of the A-list attendees as they made their arrival in this footage captured by TMZ:

Is that a present in Sarah Jessica Parker's arms?? We cannot even fathom the stress in trying to find the perfect birthday present for a man like Barack Obama. Whatever she got him could not possibly trump this though:

Happy 55th, Barack! A brother to me, a best friend forever. pic.twitter.com/uNsxouTKOO 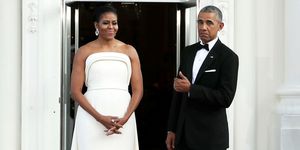