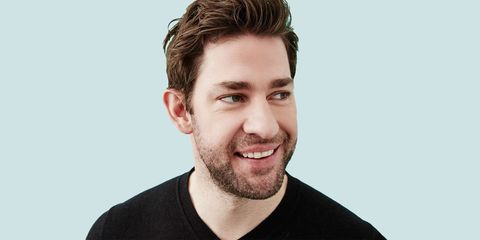 John Krasinski has zero problem dominating headlines. It comes with the job. What he does have a problem with is speculation: speculation about his marriage, his personal life, or really that of any celebrity. He's astute, and when it comes to his own fame, he gets it.

"I always say to Emily, when someone wants a picture I'll take a picture," Krasinski told me at New York's Crosby Street Hotel. "Not when I'm with my kids, but I'll take a picture with anybody because if I'm really honest, if Denzel Washington sat next to me in a restaurant I'd be geeking out too. I can't ever say, 'What's your problem, we're eating.' I get it, it's exciting."

Thanks to a lovable role on The Office (edit note: Jim and Pam Forever) and a slew of recent blockbusters, Krasinski is already Denzel-levels of famous. But his decision to direct The Hollars had nothing to do with furthering his celebrity status. This is a passion project in the truest sense: Krasinski's love for the film comes through in spades, and the result is a compelling family drama. MarieClaire.com talked to the actor about what makes The Hollars so relatable to millennials, his relationship to fame, and the very real sacrifices he made while making it.

Marie Claire: Family dramas can easily fall victim to cliché, but you effortlessly balanced the sentiment of this movie with humor. It never came off as heavy handed. Was that intentional?

John Krasinski: One hundred percent. I'm a sap, I'll cry at anything. But I don't cry when I feel manipulated, or when there's a music cue telling me to. We knew tonally, that was going to be our biggest challenge making this movie—but I tried not to talk about it with the cast and just kept an eye on it.

MC: You touched on a lot of coming-of-age themes in this film, despite the characters being in their early thirties. It made me realize that perhaps the emotional switch from child to adult doesn't really happen until you either lose a parent, or have a kid of your own. Was this your experience?

JK: When I signed on as an actor, I didn't have a kid, and when I signed on as a director, I did. To say that my interpretation of this movie changed would be the understatement of the year. I was completely viscerally moved and inspired in a whole new way. All the cliches are true about parenting. All I've ever wanted to do is be a father, but there's this existential mirror that's held up when you have a kid. I related so much to the responsibility of being a parent, the responsibility of "did you screw your kid up," the responsibility of letting your own parents down. There's a big conversation happening there.

MC: And it's a conversation a lot of millennials are having for the first time.

"I don't want my kids to ever think that I am choosing my job over them."

MC: Women are asked this to the point that it's a stereotype, but I think it's a valid question: how do you balance working on a film about family with spending time with your actual family?

JK: No one's asked me that question, and I'll be really honest about it. Because the truth is, I think everybody wants to say "Oh, it's easy," or, "Oh, it didn't matter," or, "Oh, I was always there for my kids." I'll be honest and say I wasn't there for my daughter, except on the weekends. I would shoot all week and fly home to see her. We live in a very modern age and the dynamic of raising kids and being a professional are intersecting a lot more—especially for women. I think one of the coolest things for my daughters is that they'll get to see their mom being a working mom. It's one of the things I'll be most proud of.

MC: How did you divide that time without sacrificing?

JK: To me, this business is a dream and a lottery ticket in every single way except when you can't be there for your kids. I'm not gonna be one of those actors who's like, "It's such a drag to not see your kids." Of course it is, but that's the compromise that you're making. When I felt like I was sacrificing was the day I took the job. But it's one of those things where, this is what we've chosen, we've to go do it. Family comes first for me in every single way, so I'll direct like this and then I won't direct again for a while, because personally I don't want my kids to ever think that I am choosing my job over them.

MC: In terms of gender diversity in Hollywood, a lot of actresses I've spoken to have said it comes down to directors hiring more women behind-the-scenes. Was this important to you, especially since you have daughters?

JK: Totally. I've had the very special experience of my first job being The Office. We had a whole lot of women writers, a female cameraperson—our first AD was a woman. I grew up in this business knowing there were certainly more men than women on set, but the idea was that powerful positions could always be filed by women. I'm lucky enough to have never seen the difference, so I never see a difference.

"Anything I do is totally up for conversation and it's not my right to be able to stop a person from writing whatever they want. What's harmful and hurtful is when people speculate."

MC: The culture of celebrity has changed so much, even since you were on The Office. How do you cope in an environment where everything you do is fodder for a headline? Is part of the way you achieve balance by taking on movies like The Hollars, which seem a little quieter?

JK: Whatever coverage we get comes from our decision to do this. So that argument of, "Well, you deserve it because you asked to be famous," that's really true in a lot of ways. The only thing I think is difficult is the fascination with rumors. For me, anything I do is totally up for conversation and it's not my right to be able to stop a person from writing whatever they want. What's harmful and hurtful is when people speculate. It would be great for me if headlines read: "This Is Speculation...But Here Are All the Things I Think!" That's a big difference from saying, "So-and-So Is Gay," or "So-and-So Is Divorced." That's no longer the realm of famous people vs. not famous people, it's just slander. That's the only thing I find totally bizarre about celebrity, the fascination with the unknown.

MC: How do you deal with fame in regards to your family?

JK: I totally get the interest. For me, it's just that thing of gossip becoming truth. There's a problem in that. My wife has it way worse than I do.