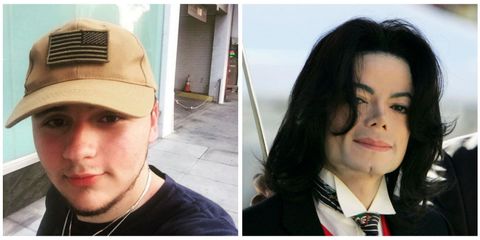 It's been seven years since Michael Jackson's untimely death, and the King of Pop would have turned 58 on Monday. To pay tribute to his father, "Prince" Michael Jackson Jr., Michael's 19-year-old son, wrote a sweet poem to show the hidden side of the public figure.

"Today we celebrate the birthday of a legend, but don't forget to celebrate the Man," he wrote on Twitter. "Here is a sonnet written for him."

Today we celebrate the birthday of a legend, but don't forget to celebrate the Man. Here is a sonnet written for him pic.twitter.com/5t7k11qAzl

In the poem, Prince uses his legal name, Michael Jackson Jr., and talks about how his father was a human being just like the rest of us, despite having such an iconic place in music history. "The many know the Legend and the Myth/A lucky few know the Man as he is," he wrote. "He is pure, tested, yet has forgiven."

Taj Jackson, Prince's cousin and Michael's nephew, tweeted his praise of the poem:

Couldn't have said it better myself. https://t.co/NTj5JH6iV3

And Paris Jackson, Prince's sister, reposted the poem on Instagram, adding: "Love this…proud of you big brother. And happy birthday to the man that means more to us than anything and anyone ever could."

Fans, friends, and family members used the #MichaelJacksonDay to remember the late King of Pop and his influence on them.

We're so touched to see such an outpouring of love for Michael in celebration with your events, pics, posts & thoughts. #MichaelJacksonDay