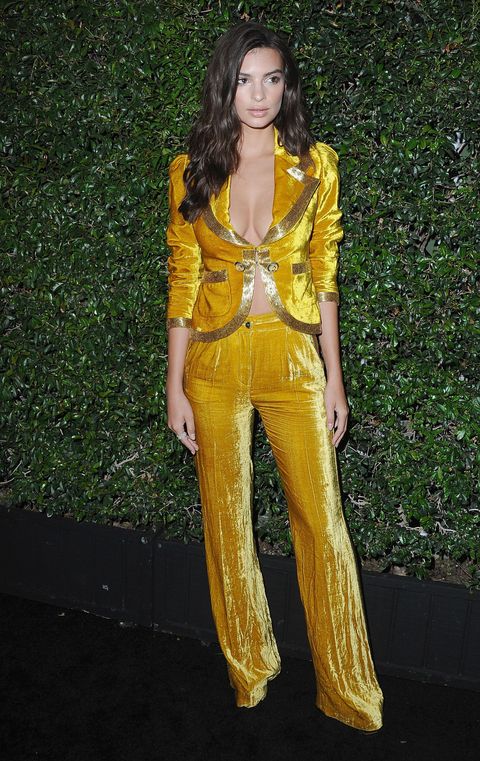 In a candid new essay about sexism, "Blurred Lines," and her at-first-accidental support of Bernie Sanders, Emily Ratajkowski reveals that she's gotten so accustomed to a malicious, woman-specific sort of criticism that it barely registers anymore—barely.

"I realized then that I've been called an attention whore so often that I had almost gotten used to it," she wrote in Glamour's October issue. "And as women we are accused of seeking attention more than men are, whether for speaking out politically, as I did, for dressing a certain way, or for even posting a selfie. Our culture has a double standard that runs so deep, many women have actually built up an automatic defense—attempting to be a step ahead of potential critics by making sure we have 'real' reasons for anything we say or do."

If you'll recall, there's perhaps no better (worse) example of this than when Ratajkowski leapt to Kim Kardashian's defense after she posted a nude selfie, later appearing in a defiant "f*ck-off" double selfie alongside the reality star. At the same time, this could be read as a personal note to Piers Morgan, one of Ratajkowski's biggest detractors/trolls. But then again, you would need him to have at least some self-awareness for that to work.

An excerpt from my essay for @glamourmag 👀 read the rest online now. LINK IN BIO

Chelsea Peng I'm Chelsea Peng, the assistant editor at MarieClaire.com.
This content is created and maintained by a third party, and imported onto this page to help users provide their email addresses. You may be able to find more information about this and similar content at piano.io
Advertisement - Continue Reading Below
More From Celebrity
Chrissy Teigen Shared a Sweet Video With Luna
EmRata Displayed Her Bump in an Open Button-Down
Advertisement - Continue Reading Below
Harry Sent a Legal Warning Over "False" Article
Chrissy Teigen Talked About Her Baby Loss Photos
Chrissy Teigen Opens Up About Her Loss
A Look Back at Gwen Stefani & Blake Shelton's Love
Serena Williams Shows Off Toned Body In BTS Photos
See a Romantic New Photo from Beatrice's Wedding
Harry Was Treated as a "Spare" by the Royals
Cardi B Called Out Racist Reactions to Her Birkins