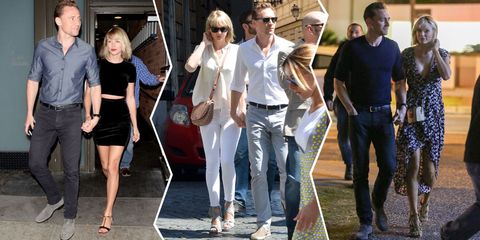 The loved-up pair have reportedly split after just three months of dating and one magnificent world tour, and we're left with no choice but to hold onto the memories. By which we mean hunt down photos from every time Tom and Taylor were seen in public. It was the best of times, it was the worst of times, it was Summer 2016.

New York Is (Er, Was) for Lovers

Behold, the first time Tom and Taylor were spotted in public, just before the Met Gala. Taylor was still dating Calvin Harris at the time, but can we please talk about the way she's peering at Tom? If the walls at Anna Wintour's house could talk...

The photo that started it all—when Hiddle and Swift joined forces to become the unstoppable duo that was Hiddleswift. Too bad fall arrived and ruined everything.

The Nashville Handhold That Sank a Thousand Ships

Theory: Selena's "Hands to Myself" is secretly about this moment.

Another Day, Another Beach

Ah yes, when Taylor and Tom hit Ipswich and wandered around like a living, breathing Eddie Bauer catalogue (in a good way). Note that Tom's mom was there—because that's how serious their relationship was after one month.

Make some room, Audrey Hepburn, because Hiddleswift's Roman Holiday was pure goals. Those matching outfits are not messing around.

July Fourth, a Day to Celebrate America and Hilddleswift

Remember when Tom Hiddleston wore an "I Heart T.S." tank top? He probably wants us to forget, but nope, not happening.

En Route to Australia: The Beginning of the End

Taylor accompanied Tom to Australia so he could morph into his evil alter-ego, Loki. At this point, everything started (slowly) going downhill. We blame Thor.

Look how in love they were? LOOK. AT. TOM'S. FACE.

This is the second-to-last photo that was taken of Hiddleswift in public. 😥

This is Tom and Taylor's final public appearance on July 27 before Tay cut things off. The good news is we'll always have Rhode Island. And L.A. And Ipswich. And all those random rocks they perched on.

Mehera Bonner Contributor Mehera Bonner is a news writer who focuses on celebrities and royals—follow her on Instagram.
This content is created and maintained by a third party, and imported onto this page to help users provide their email addresses. You may be able to find more information about this and similar content at piano.io
Advertisement - Continue Reading Below
More From Celebrity
A Look at Royal Family Portraits Through the Years
The 50 Most Popular Episodes of ‘Friends,’ Ranked
Advertisement - Continue Reading Below
Inside the Royal Family's Secret Code-Word System