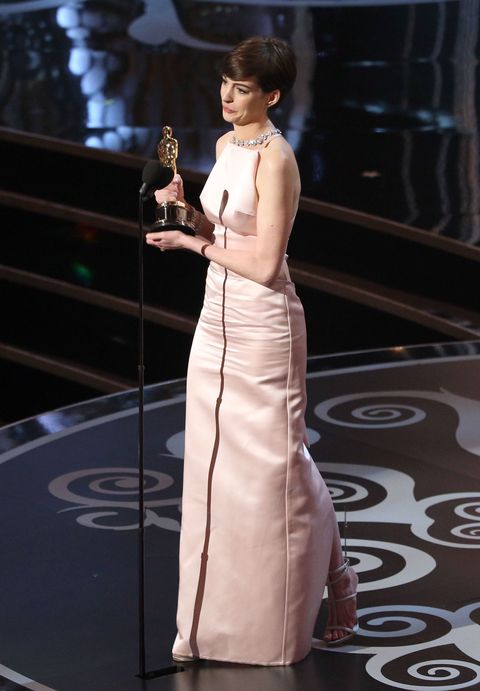 A few years ago, America's favorite pastime seemed to be hating on Anne Hathaway. People who didn't like her said she seemed like that one theater kid in their school, or that she seemed arrogant when winning one of her many awards. But it turns out that there was way more going on with Hathaway than she was letting on at the time.

In an interview with The Guardian, Hathaway said that when she won her Oscar for Les Miserables, she was still in Fantine's mindset. She hadn't quite emerged from the emotional lows required to play her, but had to also understand she was achieving a major career milestone. Here's what she said:

"I felt very uncomfortable. I kind of lost my mind doing that movie and it hadn't come back yet. Then I had to stand up in front of people and feel something I don't feel which is uncomplicated happiness. It's an obvious thing, you win an Oscar and you're supposed to be happy. I didn't feel that way. I felt wrong that I was standing there in a gown that cost more than some people are going to see in their lifetime, and winning an award for portraying pain that still felt very much a part of our collective experience as human beings. I tried to pretend that I was happy and I got called out on it, big time. That's the truth and that's what happened. It sucks. But what you learn from it is that you only feel like you can die from embarrassment, you don't actually die."

Back in 2014, she told Harper's Bazaar that playing Fantine actually damaged her health, leaving her exhausted and suffering from the flu. Plus, she was frustrated that all people would talk about was her changing her appearance for the part, rather than the message she was trying to send about sexual slavery. So that ended up affecting how she spoke in public.

At the time, Hathaway received some serious backlash about how she behaved during awards season. She was called smug and inauthentic, and corny for saying "It came true" during her Oscar speech. And that criticism really affected her. "[I felt] punched in the gut," she told Bazaar. "Shocked and slapped and embarrassed. Even now I can feel the shame. Now I'd be fine. I really would be. I'd let it roll off my back, but at the time I was still partly Fantine. I was still identifying with being a victim."

So if you're still a Hathahater (which, yes, is a real term), go ahead and watch the clip that earned Hathaway that Oscar, and try not to get full-body chills. I dare you.