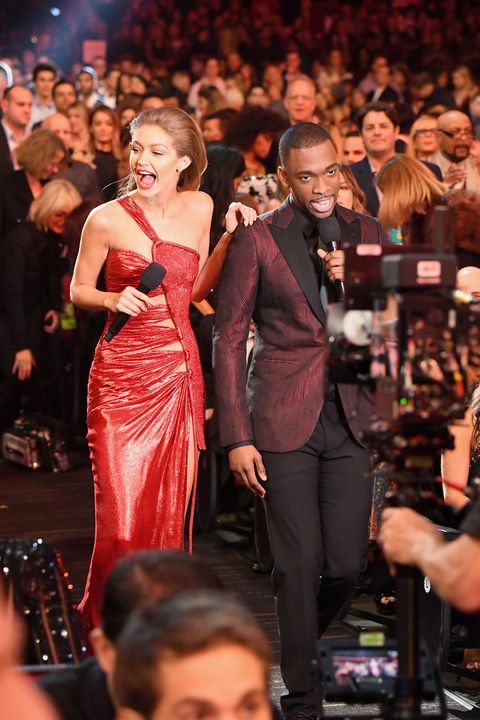 ICYMI, Gigi Hadid did a hammy Melania Trump impression at the AMAs, marking the progression of the model from mainstream-awards-show attendee to honoree to mistress of ceremonies. How did network television come to resemble backstage at a fashion show? Ahead, five ideas in progress.

Regular people, especially Americans, expect to see pretty people on TV. Actresses and musicians are definitely pretty, but models are still the prettiest pretty people. They also lend a certain sense of occasion to events that are usually nothing more than a series of cheap thrills because their line of work is walking solemnly while wearing intricate, thoroughly thought-out works of art. Plus, since samples were made for them, they've got access to the nicest clothes, which raises the red carpet game.

Kendall Jenner took one little Instagram sabbatical and came back more well-"liked" than ever. Models have massive followings. More followers = more potential viewers. Therefore, persuading models to come to/host your awards show = basically inviting millions of plus-ones to come with them. (See: the Tonys, which went from an industry do to chichi fashion thingy slightly more people cared about.)

3. The 'They're There Anyway' Theory

Did you catch Hannah Jeter, née Davis, presenting (ish)? Did you see Karlie Kloss introduce Nicki and Ariana? A few years ago, they and their ilk would've been in the audience as guests of guests (or squadettes of squad commanders—we'll get to that next), so why not take advantage of their presence and put them to work?

For all her later troubles, everything Taylor Swift touched at one point turned into gold, including her friends. Even the girls known for their commercial work (Lily Aldridge, Martha Hunt), she brought up from relative obscurity to household-name-level recognition. Of course, the Jenners and Hadids needed no such grappling hook, but perhaps some others might not have risen so high, so quickly had it not been for the Great Leader.

Is fashion losing its cool, which is really what they mean when they say it's becoming more democratic? There's nothing wrong with wanting to reach a wider audience (to earn their money), so perhaps dressing a Victoria's Secret Angel in Balmain and seating her front-row is not so different from Versace appointing Zayn its first "rock star designer." By inserting models into an arena in which they hadn't really stepped foot since the '90s, the two spheres are moving closer and closer together, maybe until they overlap. We, for one, welcome the day teens in every corner of the U.S. know how to pronounce "Olivier Rousteing" correctly.

Chelsea Peng I'm Chelsea Peng, the assistant editor at MarieClaire.com.
This content is created and maintained by a third party, and imported onto this page to help users provide their email addresses. You may be able to find more information about this and similar content at piano.io
Advertisement - Continue Reading Below
More From Celebrity
The Queen Displayed a Rare Photo of the Sussexes
Justin Backs Britney After Conservatorship Hearing
Advertisement - Continue Reading Below
Jen Aniston Said a Male 'Friends' Star Was Rude
Jennifer Aniston on "Silly" Love Life Speculation
People Are Devastated by Britney's Revelations
Britney Spears on "Abusive" Conservatorship
'Too Hot to Handle' S2 Was Filmed In Paradise
About That "Sexy Nerd" From 'Too Hot to Handle'
Prince Charles Is Leaving London When Harry Visits
What Happens on Katie's Season?