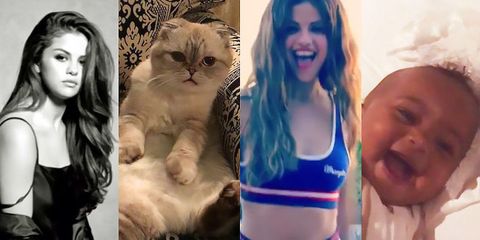 Instagram completely overhauled how it treats videos this year, letting users upload 60-second videos, put clips on Instagram Stories, and now even go live. And nobody took advantage of these new features like the celebrities with follower counts bigger than some countries' populations. Check out the most popular celebrity Instagram videos of the year, as tallied by the Instagram team themselves.

Finally got to meet this sweetheart -she owned it fully

When Selena held a dance-off with viral internet sensation Audrey Nethery backstage during her Revival tour, fans went crazy for the video, to the tune of 20 million views.

Selena serves as hostess with the mostest in this clip walking through her Independence Day house party. She ends the vid with a splash as she jumps into her picturesque pool. Lots and lots of people liked the video, probably out of sheer jealousy.

World-renowned soccer star Lionel Messi caught his youngest son on camera taking a few first steps towards his older brother and family dog—on a miniature soccer field, of course. Is this the first glimpse at a star athlete in the making?

Selena filmed herself and friend, Theresa Marie, goofing off and celebrating National Doughnut Day—a holiday that should no doubt be recognized by all.

Put down the weapons you fight with- #KillEmWithKindness video TOMORROW! 💋

A teaser for Selena's "Kill 'Em with Kindness" video is the number-five Instagram video of the year, featuring backstage footage of the star getting ready for her shoot.

Olivia Swift is all of us, really.

Drama tonight in Toronto 📸 ya can follow @Pantene #RevivalTour

While backstage in Toronto during her Revival tour, Selena took a hair flip Boomerang that received nearly 7 million views.

8. Selena in the Coca-Cola offices

Selena became the celebrity face for Coca-Cola this year, and in this vid at their HQ, she's (adorably) just as in awe of her ads as we are.

We began with Selena, so it only makes sense to end with Selena. And a burger.