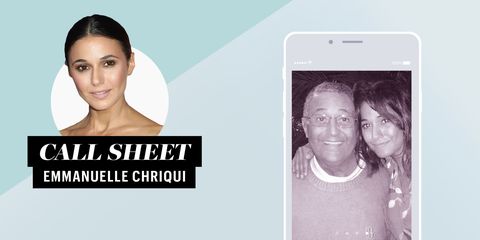 Ever wondered what's on your favorite celebrity's phone (ya know, in a non-weird way)? MarieClaire.com teamed up with actress Emmanuelle Chriqui to unlock some cellular secrets, and got details on the Shut Eye star's unpublished Twitter drafts, personal texts, and even her lock screen photo. Let's collectively swipe right, shall we?

What was the last photo you liked on Instagram? "It was of my girl Naomie Harris at a Golden Globes event!"

What was the last Podcast you listened to? "Jerry Ferrara's Bad for Business."

What was the last random thing you took a photo of? "The hole under the sink in my kitchen that needs to be repaired, ha!"

What's the oldest photo on your phone? "Pictures from my time in Paris about three years ago, I was shooting a film there. Also known as the best summer of my life."

The newest? "At a Golden Globes event with my girl Jenna Dewan Tatum."

What's a Twitter draft you still haven't pushed send on? "I'm not going to tell you because if I didn't push send there's a reason!"

The last song you played on Spotify? "'On My Mind' by Moxie Raia."

What about your most *played* song? "'Unthinkable' by Alicia Keys."

What was the last think you Google searched? "Obama's speech after Trump became president."

What was the last thing you bought using your phone? "Pajamas by Eberjay. Best, softest pajamas ever."

What's your phone's lock screen photo? "A picture of my father and me."

Open your alarm clock app: how many alarms are saved in there right now? "I clear them every so often, but right now I have three alarms."

How many unread messages are in your little red bubble email counter right now? "Zero. I am a bit of a control freak, so I don't like them building up. It stresses me out if I have unread emails. I like to know that I've answered everything. Everyone says I'm the quickest on text and emails because I hate the build up!"