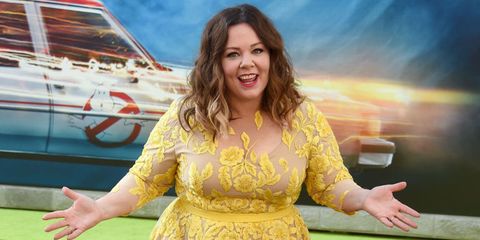 If the final four words of Gilmore Girls: A Year in the Life left you wondering if that could really be the ending creator Amy Sherman-Palladino spent years teasing, you're not alone. Melissa McCarthy, who played Sookie St. James on the WB hit and (briefly) on the Netflix reboot, felt the exact same way.

"I had been waiting a long time to know, because Amy [Sherman-Palladino] had always said she knows exactly how it ends, but now it's like, 'Is that the last four words?'" she told ET Online at the Television Critics Association press day in Pasadena, California Friday.

While it's nice to know McCarthy is with fans who felt weird about Gilmore Girls finale, she also broke some not-so-good news about her future with the series. With rumors of another Netflix season swirling, McCarthy finally addressed Sookie's future in Stars Hollow.

"No [I wouldn't come back as Sookie], but I would come back as Lorelai," she said, crushing the hopes of Sookie fans everywhere. "And that is a challenge to Lauren Graham."

Kayleigh Roberts Kayleigh Roberts is the weekend editor at Cosmo, focused on celebrity news and royals.
This content is created and maintained by a third party, and imported onto this page to help users provide their email addresses. You may be able to find more information about this and similar content at piano.io
Advertisement - Continue Reading Below
More From Celebrity
Meghan Markle Looked Gorgeous at Global Citizen
Harry and Meghan Are Taping Their NYC Trip
Advertisement - Continue Reading Below
Keep an Eye on Lady Louise Windsor
Princess Beatrice's Daughter May Get a Royal Title
James Middleton’s Wife Thought He Was a Waiter
Meghan Markle Got a New Nickname
Harry Said the Queen and Philip Were "Adorable"
Kate Middleton Played Tennis With Emma Raducanu
Tom Felton Collapsed on a Golf Course
Ashley Olsen Made a Rare Red Carpet Appearance