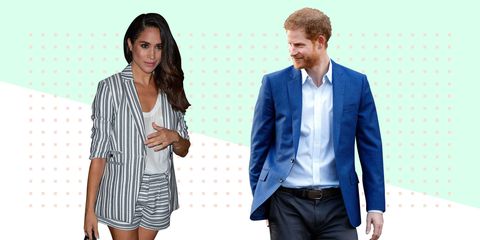 Prince Harry and Meghan Markle have been dating for just about six months, and aside from a few second-hand reports that they've "taken things to the next level" and are "practically living together," the world knows almost nothing about their relationship. What we do know is that they've been photographed on dates twice, and there are all kinds of clues to analyze.

In a quest for #facts, MarieClaire.com reached out to body language expert Blanca Cobb, who broke down every nuance in the photos of Meghan and Harry. Let's Nancy Drew this thing.

Prince Harry Is Protective of Meghan

Cobb points out that Prince Harry is walking in front of Markle in the above photos, while his "right shoulder is turned back slightly as if to shield her." Harry is exhibiting clear signs of having his girlfriend's back—or as Cobb says, "I see him being protective as he's leading her through the crowd." Considering Harry grew up in the spotlight and has a PhD in handling paparazzi, this makes perfect sense.

Prince Harry Is in Control

Take a look at Harry's hands, because they tell us a lot about his state of mind. The fact that his shoulders and free hand are relaxed means he's in "control of the situation." He isn't stressed about the swarm of photographers in his face, and he's willing to take charge.

Meghan Is Super Comfortable with Harry

Cobb notes that Meghan's hand is "snuggled comfortably" within Harry's, which yep, means their connection is legit. "This suggests that they have feelings for each other," she explains. "Holding hands is a way to show affection. And by doing so in public you're letting the world see your connection to each other. " Meaning, Prince Harry and Meghan Markle are not afraid for the world to know they're coupled up.

So, Are They In Love?

According to their body language, it's too soon to tell. Guess we'll have to wait for them to pull a Hiddleswift and be photographed making out atop a rocky outcrop.

Mehera Bonner Contributor Mehera Bonner is a news writer who focuses on celebrities and royals—follow her on Instagram.
This content is created and maintained by a third party, and imported onto this page to help users provide their email addresses. You may be able to find more information about this and similar content at piano.io
Advertisement - Continue Reading Below
More From Celebrity
J.Lo Claps Back After Botox Comments
Meghan Wasn't Appreciated for Royal Contributions
Advertisement - Continue Reading Below
Harry & Meghan Have Had a Painful Year Since Exit
The Queen's Hot Grandnephew Is a Thirst Trap
Watch Diana Play Impromptu Piano in Rare Clip
Peek Inside the Cambridges' Country Home
Harry Is Heartbroken About His Family Situation
William and Harry Could Fight Over Diana's Legacy
William Reveals Which of His Kids Is the Cheekiest
Serena Williams's Daughter Is Taking After Mom