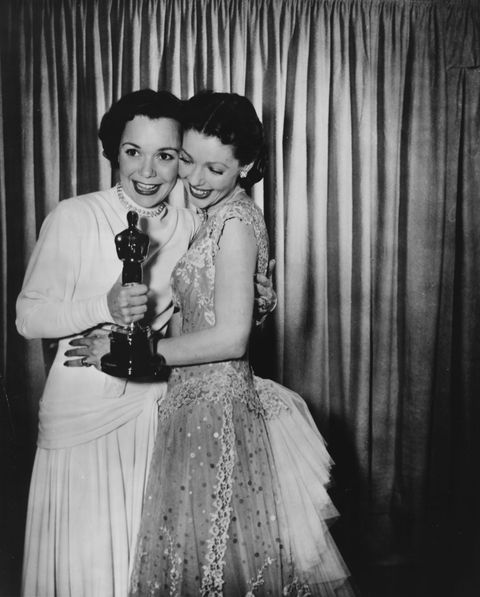 When we talk about the Oscars, we usually talk about the show, the nominees, and—of course—the recipients. But sometimes, it's interesting to talk about the literal Oscars themselves—as in all those little gold men everyone is vying to take home.

While we call the show "The Oscars" for short, its official name is actually "The Academy Awards." So how did the nickname come about? Hollywood lore points to no fewer than three people who have taken credit for it.

Hollywood columnist Sidney Skolsky claimed he coined the name after he got tired of writing "the gold statue of the academy" over and over again in his columns. He said he got the name "Oscar" from an old vaudeville joke.

Margaret Herrick, former Academy librarian and later director, claimed she named the statue Oscar after an uncle of hers.

Finally, Hollywood legend Bette Davis claimed she nicknamed the award because its butt (no joke) reminded her of her husband's when he got out of the shower. At the time, Davis was married to musician Harmon Nelson, whose full name was Harmon Oscar Nelson Jr.

According to The Hollywood Reporter, the nickname came about around 1935, or roughly during the seventh or eighth Academy Awards. #TheMoreYouKnow

Kayleigh Roberts Kayleigh Roberts is the weekend editor at Marie Claire, covering celebrity and entertainment news, from actual royals like Kate Middleton and Meghan Markle to Hollywood royalty, like Katie Holmes and Chrissy Teigen.
This content is created and maintained by a third party, and imported onto this page to help users provide their email addresses. You may be able to find more information about this and similar content at piano.io
Advertisement - Continue Reading Below
More From Celebrity
Matt Damon Trolled Ben Affleck and Jennifer Lopez
This Old Video of the Queen Saying "Nah" Is LOL
Advertisement - Continue Reading Below
Diana Had a Secret Message on Her Wedding Shoes
Will's Friends Made "Jibes" About Kate's Mom
William Will Suffer "Worst" from Harry's Memoir
Simone's Boyfriend Sent Her the Sweetest Message
Harry's Friends Don't Want to Be in His Memoir
Will & Kate's Modern Approach to Raising George
Meet Simone Biles's Super Supportive Parents
What Happens on Katie's Season?