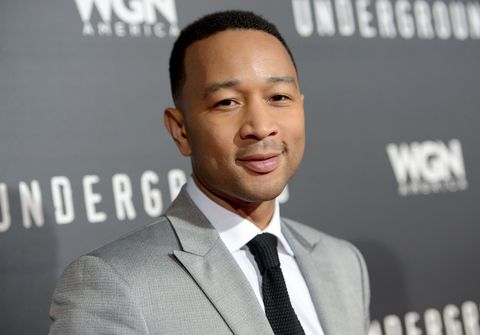 As anyone who saw La La Land knows, John Legend is gifted actor (on top of being a gifted father, husband, singer...you get the idea). But if you're especially keen to see more of John Legend the Actor, then get excited because he's joining the cast of Underground as none other than Frederick Douglass.

According to Entertainment Weekly, Legend will make a brief appearance as the legendary abolitionist, and he looks pretty legit:

Legend, who also serves as executive producer on Underground, said he understands the significance of the show, especially under the Trump administration.

"We didn't know we were going to have a second season airing during a Trump presidency," he told Entertainment Weekly. "But I think the show will teach us not only how important it is to understand our history but also how inspiring some of these actions of our forefathers were. They were extremely challenging times, and these people found the courage to fight back. I think that can be inspirational for all of us who believe that something needs to change in America."

Look out for Legend's appearance as Douglass in Underground's April 5 episode, airing on WGN America.

Kayleigh Roberts Kayleigh Roberts is the weekend editor at Cosmo, focused on celebrity news and royals.
This content is created and maintained by a third party, and imported onto this page to help users provide their email addresses. You may be able to find more information about this and similar content at piano.io
Advertisement - Continue Reading Below
More From Celebrity
Ben Affleck and Jennifer Lopez Made Out in NYC
Lady Gaga Stunned in an Old Hollywood Look
Advertisement - Continue Reading Below
Olivia Rodrigo Looked Jaw-Droppingly Beautiful
Will's "Alleged Bullying" Drove the Sussexes Out
Sam Asghari Opens Up About Britney Documentaries
Prince Harry’s Memoir Is Concerning Royal Insiders
Meghan Markle Wore Some Familiar Earrings in NYC
Harry and Meghan Could Visit England for Christmas
Meghan Markle Looked Gorgeous at Global Citizen
Harry and Meghan Are Taping Their NYC Trip