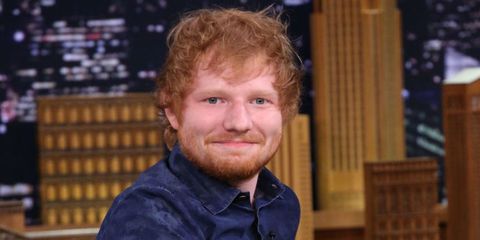 Remember when Ed Sheeran stepped out last fall with a scar on his cheek and the story about how it got it was just fantastically British? At the time, the story was that Ed had attended a party with Princess Beatrice and knelt for a pretend knighting with a real sword. In the process, he got slashed on the face.

Great story, right? Well, by January, Ed had gotten very awkward about telling the tale, insisting that everyone refer to the story as "allegedly" having happened during an appearance on The Graham Norton Show.

Now, James Blunt, who was also at the party in question, is coming out with the truth...kind of, anyway.

"Ed was drunk, messing around, and he cut himself," Blunt told ShortList. "We made a fancy story up, people fell for it. It was very embarrassing."

Blunt didn't actually say exactly what caused the cut, but he did take another verbal stab at Ed.

"It's bizarre that people fell for it," Blunt said. "I blame him. He must be desperate—he's trying to sell records."

Ouch. That has to hurt more than the original cut ever did.

Kayleigh Roberts Kayleigh Roberts is the weekend editor at Marie Claire, covering celebrity and entertainment news, from actual royals like Kate Middleton and Meghan Markle to Hollywood royalty, like Katie Holmes and Chrissy Teigen.
This content is created and maintained by a third party, and imported onto this page to help users provide their email addresses. You may be able to find more information about this and similar content at piano.io
Advertisement - Continue Reading Below
More From Celebrity
Kate and William Holiday In Cornwall
Blake Lively Wears a Pink Sequin Dress
Advertisement - Continue Reading Below
Meghan Markle Hangs Out With Melissa McCarthy
Simone's Boyfriend Sent Her the Sweetest Message
What Happens on Katie's Season?
Rebel Wilson Recreated This Britney Spears Look
Jennifer Lopez Flew Back From European Getaway
Jennifer Lopez Wears Old Bracelet From Ben Affleck
Simone Biles Cheers on MyKayla Skinner
See the Royals Socialize at a 1991 Cocktail Party