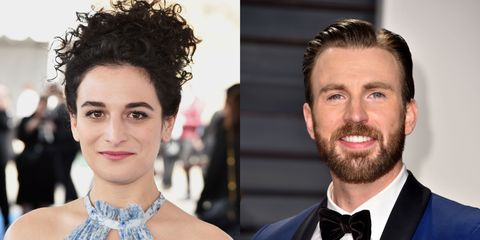 In case you somehow missed it (very doubtful), Jenny Slate and Chris Evans spent about ten months dating, causing the internet to fracture, if not break. It's what happens when you date Captain America, but still—dealing with the spotlight was hard for Slate, and she's finally opening up about their split in an *extremely* candid interview with Vulture.

On getting through the breakup:

"I was like, 'You need all new things. You are a working woman. Maybe this is an indulgence, but just start over.' It's like, Fuck."

On Chris Evans being the best:

"Chris is truly one of the kindest people I've ever met, to the point where sometimes I would look at him and it would kind of break my heart. He's really vulnerable, and he's really straightforward. He's like primary colors. He has beautiful, big, strong emotions, and he's really sure of them. It's just wonderful to be around. His heart is probably golden-colored, if you could paint it."

"I was just like, 'I want viability as an American film actress. I want to find my own seat at the main dinner table, because I want to do this forever, and I want to show that it doesn't always have to be a bikini model opposite Captain America.'"

On not being his "type":

"To be quite honest, I didn't think I was his type. Eventually, when it was like, Oh, you have these feelings for me?, I was looking around like, Is this a prank? I mean, I understand why I think I'm beautiful, but if you've had a certain lifestyle and I'm a very, very different type of person—I don't want to be an experiment. If you are a woman who really cares about her freedom, her rights, her sense of being an individual, it is confusing to go out with one of the most objectified people in the entire world. I'm considered some sort of alternative option, even though I know I'm a majorly vibrant sexual being."

"When Chris and I started dating, my husband and I had only been separated for a couple of months. Even though we had an amicable divorce, I think that's still something that you need to mourn. When you get separated from somebody that you actually care about, it is the destruction of a belief system. That is really, really sad. I just didn't have the tools. And I didn't think very hard about that, to be honest. I wanted to step into the light. Chris is a sunny, loving, really fun person, and I didn't really understand why I should be prudent."

On their relationship now:

"We're not on bad terms, but we haven't really seen each other, spoken a lot. I think it's probably best. I'd love to be his friend one day, but we threw down pretty hard. No regrets, though. Ever."