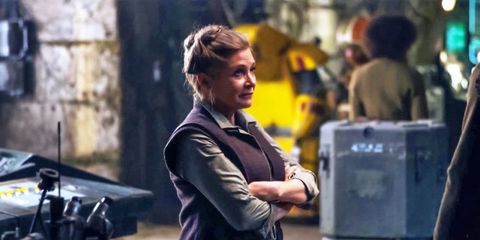 Carrie Fisher will appear in Star Wars: Episode IX, the late actress' brother, Todd Fisher, confirmed to the New York Daily News. Exactly how (and how much) Carrie will appear in the film remains to be seen, however, since shortly after her death, Lucasfilm announced that it would not use CGI to complete her performance.

During a recent appearance at opening night of the TCM Film Festival in Los Angeles, Todd Fisher said that he and Carrie Fisher's daughter, Billie Lourd, were approached about using footage of the actress in the ninth installment of the flagship Skywalker Saga—and they both said yes.

"Both of us were like, 'Yes, how do you take her out of it?' And the answer is you don't," he said. "She's as much a part of it as anything and I think her presence now is even more powerful than it was, like Obi Wan—when the saber cuts him down he becomes more powerful. I feel like that's what's happened with Carrie. I think the legacy should continue."

Though Todd said he doesn't know what her appearance in the film will entail, the family felt like they owed it to Carrie's dedicated fans to allow her likeness to be used in Episode IX.

"I'm not the only part in that equation, but I think the people deserve to have her," he explained. "She's owned by them."

Kayleigh Roberts Kayleigh Roberts is the weekend editor at Marie Claire, covering celebrity and entertainment news, from actual royals like Kate Middleton and Meghan Markle to Hollywood royalty, like Katie Holmes and Chrissy Teigen.
This content is created and maintained by a third party, and imported onto this page to help users provide their email addresses. You may be able to find more information about this and similar content at piano.io
Advertisement - Continue Reading Below
More From Celebrity
Megan Thee Stallion’s Hottie Bootcamp Is Intense
Katie Holmes' Mango Puffer Coat is a Winter Staple
Advertisement - Continue Reading Below
Kate Rewore Her Favorite Festive Tartan Dress
Kate and Charlotte Hunt for Spiders Together
Princess Diana's Nieces Opened Up About Their Aunt
Elizabeth Hurley, 55, Shows Off Toned Abs On Insta
Keira Knightley Won't Do Nude Scenes Filmed by Men
Kourtney Kardashian Is Dating Travis Barker
Priyanka Chopra Jonas Talks Her New Memoir
Priyanka and Nick on Their Quarantine Quality Time