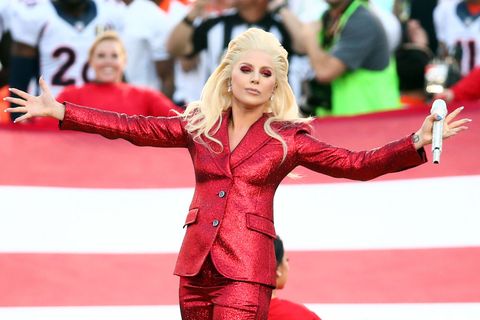 Please try not to panic, but Warner Brothers will be trolling around Coachella when Lady Gaga performs next week because—get this—they're filming scenes for A Star Is Born. And yes, her co-star Bradley Cooper will be there. And double yes, you get to be an extra.

Be there when @ladygaga films for A #StarIsBorn on the #Coachella grounds nxt wk! Sign up now: https://t.co/2T7FDjkzmz

Filming takes place on April 18 and 19, and the scenes will be mimicking a "country western concert." If you want to get in on the action you have to be 18 or older, throw down $10, and must dress in western wear. Or, as the press release muses, "All you Monsters that can attend should get decked out in your most comfortable denim & boots, throw on a Stetson (leave those pink Joanne hats at home) and come out to show your support!"

LOOK who showed up to watch me perform! 😍what a guy. Talkin' creative and enjoying some backstage fun. Thank you @marcjacobs for the INCREDIBLE #JOANNE FASHION. IT IS SO WELL MADE. I've Buried the shoes in nondescript location and only I know where they are. SORRY. 🕵️‍♀️

Cooper is directing the musical, which is about a singer (played by his friend Lady Gaga, obviously) whose career takes off thanks to an "aging rocker" (played by Cooper). Naturally, they fall in love. The film has actually been made several times before with stars like Judy Garland and Barbra Streisand in Gaga's role, so she's stepping into some iconic shoes.