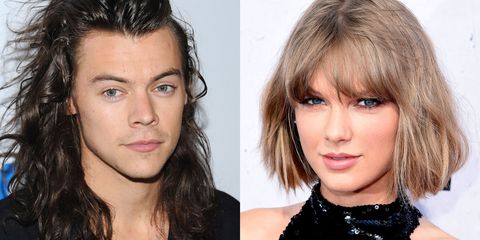 Please cast your mind back to 2012, when Taylor Swift started dating Harry Styles. The pair debuted their love connection (AKA their second date) during a walk in Central Park, and broke up a month later. The relationship was brief, but prompted Swift to write not one, but two songs about it: "Out of the Woods" and "Style."

Good, weird times—and now Harry Styles is finally discussing what happened. "When I see photos from that day," he told Rolling Stone, "I think: Relationships are hard, at any age. And adding in that you don't really understand exactly how it works when you're 18, trying to navigate all that stuff didn't make it easier. I mean, you're a little bit awkward to begin with. You're on a date with someone you really like. It should be that simple, right? It was a learning experience for sure. But at the heart of it—I just wanted it to be a normal date."

Fair enough, and when it comes to Swift's songs about him, Styles isn't holding a grudge. "I mean, I don't know if they're about me or no ..." he said with what Rolling Stone describes as an attempt at "gallant discretion." "But the issue is, she's so good, they're bloody everywhere. I write from my experiences; everyone does that. I'm lucky if everything [we went through] helped create those songs. That's what hits your heart. That's the stuff that's hardest to say, and it's the stuff I talk least about. That's the part that's about the two people. I'm never going to tell anybody everything."

When asked if he ever told Swift he liked her songs, Styles mused, "Yes and no. She doesn't need me to tell her they're great. They're great songs...It's the most amazing unspoken dialogue ever."

Meanwhile, this is what he'd say to Taylor Swift if he ran into her today: "Certain things don't work out. There's a lot of things that can be right, and it's still wrong. In writing songs about stuff like that, I like tipping a hat to the time together. You're celebrating the fact it was powerful and made you feel something, rather than 'this didn't work out, and that's bad.' And if you run into that person, maybe it's awkward, maybe you have to get drunk...but you shared something. Meeting someone new, sharing those experiences, it's the best shit ever. So thank you."

Mehera Bonner Contributor Mehera Bonner is a news writer who focuses on celebrities and royals.
This content is created and maintained by a third party, and imported onto this page to help users provide their email addresses. You may be able to find more information about this and similar content at piano.io
Advertisement - Continue Reading Below
More From Celebrity
'Too Hot to Handle' S2 Was Filmed In Paradise
About That "Sexy Nerd" From 'Too Hot to Handle'
Advertisement - Continue Reading Below
Prince Charles Is Leaving London When Harry Visits
What Happens on Katie's Season?
Meghan Wrote a Book When She was in Eighth Grade
Irina Pairs Her LBD With a White Shirt and Sandals
A-Rod Explained Why He Was Spotted With Ben's Ex
Selena Felt "So Less Than" in Past Relationships
Why Will & Kate Wouldn't Hang Out With Harry
Katie Holmes' Gingham Dress is Summer Perfection