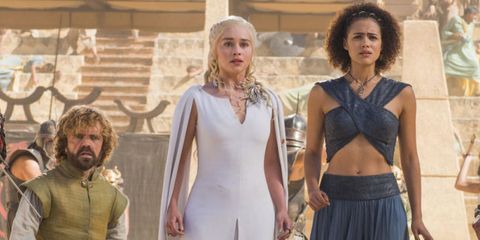 The upcoming seventh season of Game of ThronesGame of Thrones will be different in some notable ways. Most glaringly, it will have fewer episodes than previous seasons (just seven, as opposed to the typical 10).

The Game of Thrones actors are also noticing some differences—like to their workload. You might think that with fewer episodes, the actors would have an lighter workload, but the opposite has actually been true.

Peter Dinklage, who plays Tyrion, agreed. "I've worked more days this season than I have in quite some time."

How can that be, you ask? Well, for starters, it's Game of Thrones and that means a lot of deaths. Several characters died at the end of Season 6 (and, let's be honest, there are probably more on the way in Season 7).

"You kill a couple dozen characters, the people who are left by default need to carry more dramatic weight," showrunner Dan Weiss explained.

The other big factor? The characters in the GoT world are finally starting to meet each other. Where previous seasons required flashing around to different ends of the globe to tell characters' stories, now, more and more of those characters are joining up and that means more screen time in one place.

"As the worlds start to converge the characters who haven't met each other before start to meet each other and there are more main characters together in each other's storylines than ever before," Weiss said. "Every since Tyrion crossed the Narrow Sea and met Dany that's been the general direction. And having them on set together is a real privilege for us."

It's a privilege for fans too—or it will be, anyway, as soon as July 16 rolls around.

Kayleigh Roberts Kayleigh Roberts is the weekend editor at Marie Claire, covering celebrity and entertainment news, from actual royals like Kate Middleton and Meghan Markle to Hollywood royalty, like Katie Holmes and Chrissy Teigen.
Advertisement - Continue Reading Below
More From Celebrity
The Future of Harry & Meghan's Sussex Royal Brand
Sussexes Announce Plans to Move to North America
Advertisement - Continue Reading Below
Queen Says She's "Particularly Proud" of Meghan
Meghan and Harry Will Still Live at Frogmore
How Meghan Markle and Prince Harry Will Make Money
Harry and Meghan's Royal Exit Is Official
Selena Got Choked Up Reflecting on Her Love Life
Queen's Aides Are Struggling to Finalize Megxit
Katie Holmes Is Struggling With Adulthood, Too
Doria Ragland Says Meghan Will "Always Be Okay"