Production has been suspended on Bachelor in Paradise as a result of "misconduct," and the internet is practically bursting at the seams with rumors—many of which are highly upsetting. And while the cast has been tweeting up a storm, the powers that be in Bachelor Nation have stayed pretty quiet—until now.

After a full day of radio silence, host Chris Harrison has made a public statement about the rumors and speculation surrounding Bachelor in Paradise's suspended filming.

"By now, no doubt, you have heard that we have suspended production on this season's Bachelor in Paradise," Harrison said. "I can confirm to you that this is sadly the case. Out of respect to all involved, there's only so much I can and will say at this time. Normally with a situation like this I would not say anything until the incident is fully resolved, but with all the rumors and misinformation being put out there, I don't find that to be possible anymore."

"An investigation into the situation was started immediately," he continued. "Warner Bros. is handling the details of that investigation. They're moving quickly to gather all the facts, and once that's done, a clear, concise decision can be made about where we go from here."

^ If you're unfamiliar with the show, here's a glimpse of last season.

Harrison also advised fans not to engage in rumors and speculation, and to wait for the facts: "There are a lot of competing details in the various press accounts of the incident. And there's a lot of misinformation out there too. We urge everyone to be patient until the investigation is complete. I know in this day and age we want—and even expect—immediate answers, but in this case, it's just not possible. So again, I urge you to please be patient and respect the privacy of the parties involved." 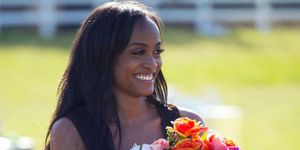 Mehera Bonner Contributor Mehera Bonner is a news writer who focuses on celebrities and royals.
This content is created and maintained by a third party, and imported onto this page to help users provide their email addresses. You may be able to find more information about this and similar content at piano.io
Advertisement - Continue Reading Below
More From Celebrity
Gabrielle Union Debuted a New, Short Haircut
J.Lo Made Out With Ben on IG for Her 52nd Birthday
Advertisement - Continue Reading Below
Are Will & Kate Sending a Message to Harry & Meg?
Harry and Meghan Reportedly Have a Four-Book Deal
Naomi Osaka Lit the Olympic Cauldron in Tokyo
John Legend Performed "Imagine" for the Olympics
Simone Biles Is Honored With Her Own GOAT Emoji
Kate Winslet Reveals Her Favorite Red Carpet Look
Margot Robbie Had a Life-Size Cutout of John Cena
Jennifer Lopez and Ben Affleck Are IG Official