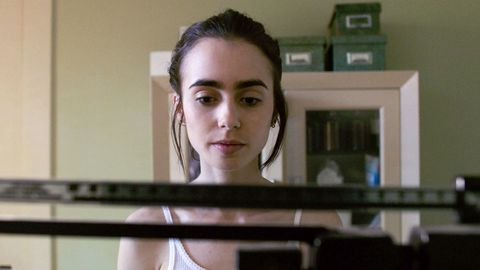 Lily Collins' new movie To The Bone has already been met with lots of mixed opinions. Collins plays Ellen, a girl with anorexia, and some have criticized the film's depiction of the illness and expressed fears that it will glamorize eating disorders.

Collins, who has been open about her past struggles with eating disorders, lost weight (under supervision) for the emotional role. In a new interview with Net-A-Porter's digital magazine The Edit, she opened up about the most shocking reaction to her weight loss for the film—a compliment.

"I was leaving my apartment one day and someone I've known for a long time, my mom's age, said to me, 'Oh, wow, look at you!'" Collins said. "I tried to explain [I had lost weight for a role] and she goes, 'No! I want to know what you're doing, you look great!' I got into the car with my mom and said, 'That is why the problem exists.'"

However, most people were concerned by the weight loss, even with the understanding that it was for a movie role. Collins explained that publicity became difficult for a while, as many magazines didn't feel comfortable featuring her at her low weight.

"Not just on the cover—they wouldn't put me inside looking the way I did, even though it was for a movie," she said. "I told my publicist that if I could snap my fingers and gain 10 pounds right that second, I would."

The movie hit close to home for Collins and her family. She described her mother's reaction to the film.

"The first time she was a bit in shock. The second time I looked over at the end and she was sobbing; it really hit her hard," Collins explained.

Kayleigh Roberts Kayleigh Roberts is the weekend editor at Marie Claire, covering celebrity and entertainment news, from actual royals like Kate Middleton and Meghan Markle to Hollywood royalty, like Katie Holmes and Chrissy Teigen.
This content is created and maintained by a third party, and imported onto this page to help users provide their email addresses. You may be able to find more information about this and similar content at piano.io
Advertisement - Continue Reading Below
More From Celebrity
Beyoncé Stuns in a Mesh Dress With Matching Gloves
Lizzo and Chris Evans Had the Best IG Interaction
Advertisement - Continue Reading Below
Travis Shared PDA-Heavy Bday Tribute to Kourtney
How the Queen Ends Awkwardly-Long Handshakes
The Queen Has a Rule Against Bad Talking Family
The Queen Took a Pic of Philip With Her to Funeral
The Queen's Tolerance Was the Key to Her Marriage
J.Lo "Likes" Shady IG Post After A-Rod Split 👀
Beyoncé Shares Photos of Her White Power Suit
Will & Kate Welcomed Harry Back Into Their Group