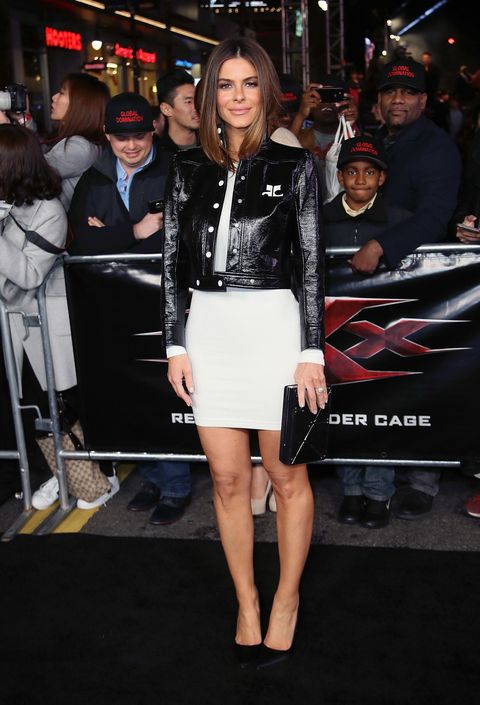 Menounos's doctor was able to remove 99.9 percent of the tumor, which was benign.

"He said there's a six to seven percent chance that we'll see it come back," Menounos told PEOPLE. "But I'll take those odds any day."

While Menounos is back at home healing after her surgery and spending time with her mother, who is fighting stage 4 brain cancer, the TV host has decided to step down for her position as anchor at E! News, E! News reported.

Maria Menounos and her mom at the 2012 Golden Globe Awards.
Getty Images

"I am so grateful for the past three years at E!. I had such an amazing time co-hosting with Jason Kennedy and working everyday with the wonderful roster of talent on the show including producers, staff and crew. It was such a special, good-hearted group and one I'll always consider family," Menounos told E! News.

"Our thoughts and support go out to Maria and her family and we wish them all the best knowing that Maria will tackle this with the same fierce dedication she is known for," Adam, President of E! Entertainment, said. "We are grateful for Maria's many contributions to E! over the past three years."

Menounos, who has also hosted Extra and Access Hollywood and appeared on Dancing with the Stars, said she started experiencing symptoms back in February.

"I'd been getting lightheaded on set and having headaches," she told PEOPLE. "My speech had gotten slurred and I was having difficulty reading the teleprompter."

After an MRI showed that a golf-ball-sized meningioma brain tumor was pushing on her facial nerves, Menounos said she actually laughed at how "surreal and crazy and unbelievable" that she would also get a brain tumor, like her mother.

"I don't have my balance fully yet but as long as I'm holding on to Keven, I'm sturdy and fine," Menounos told PEOPLE about how her fiancé Keven Undergaro is helping her through this health scare. "My face is still numb. This is something that takes at least a month of healing, but I'm getting stronger and stronger every day and I'll be back to normal very soon."

Lyndsey Matthews Freelance Writer Lyndsey Matthews is the Destination News Editor for AFAR; previously she was a Lifestyle Editor across all of Hearst Digital Media's brands, and a digital editor at Martha Stewart Weddings and Travel + Leisure.
This content is created and maintained by a third party, and imported onto this page to help users provide their email addresses. You may be able to find more information about this and similar content at piano.io
Advertisement - Continue Reading Below
More From Celebrity
Sussexes Will Return to Social Media, Harry Said
A-Rod Celebrated J.Lo's Inauguration Performance
Advertisement - Continue Reading Below
The 6 Most Expensive Royal Wedding Dresses
Inside Kitty Spencer's Stunning £19 Million Home
Meghan Was Hit With Thousands of Vile Comments
Watch Meghan's Candid 2013 Larry King Interview
Kate & William Are "Besotted" with Their New Puppy
J.Lo Re-creates "Love Don't Cost a Thing" Video
Meghan Markle Made Prince Harry a Better Man
See a Rare Portrait of Princess Diana's Mother