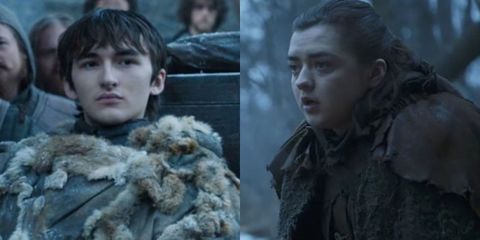 This post contains spoilers for Game of Thrones Season 7, episode 4, "The Spoils of War."

On this week's Game of Thrones, Arya Stark finally returned to Winterfell, where she was reunited with her sister, Sansa, and her brother, Bran, AKA the Three-Eyed Raven.

Luckily for everyone involved, Arya's reunion with Bran wasn't nearly as awkward as Sansa's. Instead of alluding to having witnessed some horror of her past ("Hey Arya, I just wanted you to know you looked really pretty the day you went blind"), he gave her a gift. Well, actually it was a re-gift, but still.

First, Littlefinger presented Bran with the Catspaw Dagger—the dagger that was used in the assassination attempt on him in Season 1, because you know, that's a totally appropriate and not traumatizing thing to give a teenager. In one of the most satisfying moments of the episode, Bran responded to the gift by cryptically telling Littlefinger, "Chaos is a ladder," which threw Littlefinger entirely off his game.

Bran, being the Three-Eyed Raven and all, has no use for fancy Valyrian Steel daggers, so he passed it along to Arya, the resident badass in the Stark family (sorry, Jon).

The gift is significant for a couple of reasons. First, the dagger is one of the few known weapons in Westeros made of Valyrian Steel—one of the few substances capable of killing White Walkers. Putting more Valyrian Steel into Stark hands—and especially Stark hands that are skilled at fighting—is always a good thing.

Second, a popular fan theory for the season has Arya adding Littlefinger to her kill list and taking him out. For one thing, the dagger used to belong to him and it would be poetic if it were the weapon used to kill him. Also, Sansa has pointedly said that "no one" can protect her from the dangers she faces. Since one of the biggest of those dangers is Littlefinger and Arya is (or at least was) No One, it only makes sense that she will be the one to save her sister if the time comes.

And then there's Creepy Bran. As the Three-Eyed Raven, he can see everything that has happened ever and even though Littlefinger isn't currently on Arya's list, he's done plenty that would earn him a spot there if she knew about it (betraying Ned, killing Lysa, and, most horrifically, turning Sansa over to Ramsay Bolton for marriage).

If Bran wants to put his newfound powers to use for anything other than the battle against the Night King and making his sisters uncomfortable, he could get Littlefinger in a lot of trouble.

Kayleigh Roberts Kayleigh Roberts is the weekend editor at Marie Claire, covering celebrity and entertainment news, from actual royals like Kate Middleton and Meghan Markle to Hollywood royalty, like Katie Holmes and Chrissy Teigen.
This content is created and maintained by a third party, and imported onto this page to help users provide their email addresses. You may be able to find more information about this and similar content at piano.io
Advertisement - Continue Reading Below
More From Celebrity
Doug Emhoff Reacts to Kamala Harris's Googling Him
Harry Was Homesick for a While, But Is Happy Now
Advertisement - Continue Reading Below
Chrissy Teigen's Therapist Inspired Her New Hobby
J.Lo Claps Back After Botox Comments
Katie Just Posed in a Shirt Her Boyfriend Designed
Meghan Wasn't Appreciated for Royal Contributions
Harry & Meghan Have Had a Painful Year Since Exit
The Queen's Hot Grandnephew Is a Thirst Trap
Watch Diana Play Impromptu Piano in Rare Clip
Peek Inside the Cambridges' Country Home