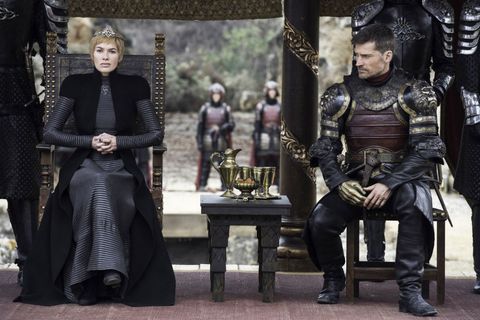 A lot happened in Game of Thrones' Season 7 finale. Jon and Dany finally hooked up. An ice dragon knocked down part of The Wall. Arya and Sansa turned on Littlefinger and put him to DEATH.

But, if we're being honest, most of that felt inevitable. We might not have been sure any of that would happen this season, but we knew it was all coming. That's why the biggest surprise of the episode was actually a much less flashy moment: When Jaime abandoned Cersei.

To recap, Jon, Dany, and most of the other characters who are are still alive met up in King's Landing to talk about a truce. Jon brought the wight he and his friends captured to prove to Cersei that zombies are real (little did they know, she has her own, calmer zombie bodyguard).

Cersei and Jaime saw the zombie and were like, "Wow, so the zombie army seems really legit." After some back and forth and tension about the possibility of the Tyrion death, Cersei promised to send her armies north to fight alongside Jon and Dany's forces. Later, when Jaime is preparing to go north, Cersei is like, "LOL I always knew you were the stupidest Lannister," and explains that she was lying and has no intention of sending her forces to help anyone.

This turns out to finally be the final straw for Jaime, who leaves Cersei. That's right: Jaime leaves Cersei. She threatens to have The Mountain kill him, he calls her bluff and walks out. This is huge for a few reasons. First, serving and protecting Cersei has been Jaime's driving force for, well, forever. Second, there's been a lot of evidence suggesting Jaime will be the one to kill Cersei eventually and this calls that eventuality into question.

More importantly though, what does this mean for Jaime? What's his next move? Winter is most definitely here (it was snowing in King's Landing when Jaime left) and he's a southern guy. Is he going to go team up with Jon and Dany? Will they trust him if he does? This is actually the biggest cliffhanger of the season even though it's not nearly as flashy as ice-fire-lightening-breath.

Kayleigh Roberts Kayleigh Roberts is the weekend editor at Marie Claire, covering celebrity and entertainment news, from actual royals like Kate Middleton and Meghan Markle to Hollywood royalty, like Katie Holmes and Chrissy Teigen.
This content is created and maintained by a third party, and imported onto this page to help users provide their email addresses. You may be able to find more information about this and similar content at piano.io
Advertisement - Continue Reading Below
More From Celebrity
Bennifer Recreated Their 2002 PDA Moment
Why Harry's Memoir Release Date Has Upset People
Advertisement - Continue Reading Below
The Royals Are Worried About Prince Harry's Memoir
Gabrielle Union Debuted a New, Short Haircut
J.Lo Made Out With Ben on IG for Her 52nd Birthday
Harry Is Putting the Queen in a Difficult Position
Are Will & Kate Sending a Message to Harry & Meg?
Harry and Meghan Reportedly Have a Four-Book Deal
Naomi Osaka Lit the Olympic Cauldron in Tokyo
John Legend Performed "Imagine" for the Olympics