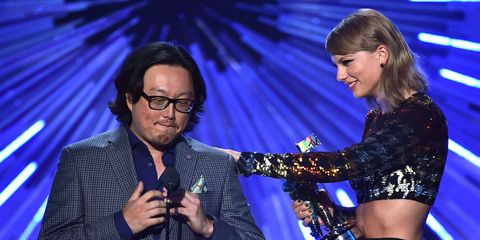 The Old Taylor is dead and the New Taylor is ready for it, but what about the real Taylor? If there's one thing her frequent collaborator, Joseph Kahn (who has directed several of her videos, including "Blank Space," "Bad Blood," and "Look What You Made Me Do"), loves more than working with Taylor Swift, it's publicly commenting on Taylor Swift. So naturally, he's happy to tell us all about the true Taylor.

"Her imaging may be changing depending on what the thematics of the art is that she's producing [but] the person remains the same, there's a core person there that's really a fantastic human being," he told Variety in a new interview.

So the Old Taylor is dead, but the Core Taylor is intact. Got it. Anything else, Joseph?

Of course there's more! Joseph has heard Reputation in its entirety and he has thoughts.

"What she does is magical. It's always impressive to me every single time. I'll just say that the album is a monster."

The rest of us commoners will have to wait until November 10 to hear the "monster" album.

Kayleigh Roberts Kayleigh Roberts is the weekend editor at Marie Claire, covering celebrity and entertainment news, from actual royals like Kate Middleton and Meghan Markle to Hollywood royalty, like Katie Holmes and Chrissy Teigen.
Advertisement - Continue Reading Below
More From Celebrity
Kylie Threw Stormi the Most Elaborate Party
Chrissy and John Had a Post-Grammys Dance Party
Advertisement - Continue Reading Below
Selena Gomez Sent an Emotional Note to Demi Lovato
Nick Jonas Had Food In His Teeth at the Grammys
Why Isn't Beyonce at the 2020 Grammys?
Watch Demi Lovato's Emotional Grammys Performance
Beyoncé's Pre-Grammys Look
Blake and Gwen Were Too Cute at the Grammys
The Jonas Brothers' Grammys Performance Was a Lot
Alicia Keys Covers 'Someone You Loved'