In case you've been living under a Riverdale-less rock (in which case, watch it immediately), you're probably aware that the show's #1 couple Jughead and Betty are dating in real life. Or, at least they're rumored to be dating.

The evidence that Cole Sprouse and Lili Reinhart are more than friends is pretty massive, and now Cole Sprouse is finally addressing them head-on—sans denial. In fact, he seems pretty here for his shippers. 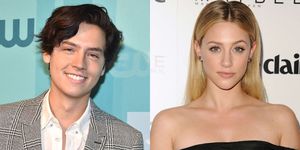 "Truthfully, it's very pleasing that people talk about Lili and I in that way," he continued. "Because it means that we're resonating so strongly that people really want that to be true."

Is now a good time to share this GIF? We think so too.

Watch the trailer for Riverdale Season 2 below.