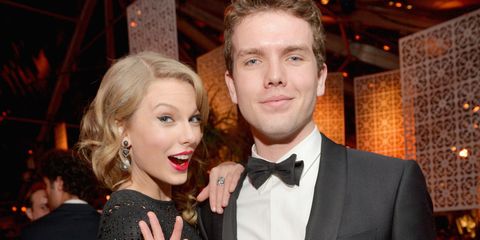 It all runs in the family, and these celebrity siblings are making moves—both inside and outside Hollywood—that are giving their famous brothers and sisters a run for their money. See what we mean...

Zac Efron's little brother Dylan was thrust into the spotlight when a certain Instagram shot—where they both showed off their abs—revealed just how good those genes are. Facts you need to know: He's 23, he's an Aquarius, and he once wrote a poem in sixth grade about how his famous bro could be kind of a jackass. Awesome.

Speaking of genes, Alex Watson looks verrrry similar to his sister Emma Watson. The 22-year-old currently works as a model.

The 23-year-old majored in film, TV, and theatre at the University of Notre Dame—and is no stranger to Hollywood events. He's been seen pretty much everywhere with his superstar sis—the Taylor Swift.

Initials aren't the only thing Jonathan Timberlake shares with his bro—a passion for music runs in the blood, as the 22-year-old works as a producer.

The brother of the late Paul Walker (RIP) just landed his first huge role in USS Indianapolis: Men of Courage opposite Nicholas Cage—the baby blues are definitely reminiscent of Paul's, aren't they?

Monica is a Spanish actress and dancer, who has designed collections for Mango and appeared in ad campaigns alongside her older sister, Penelope.

While Eduardo is a singer who dated the likes of Eva Longoria. All, obviously, are beautiful.

Joan Smalls' little sister Erika Smalls got thrown into the spotlight recently by starring alongside her sister in the newest Balmain campaign. She currently splits her time between Puerto Rico and New York.

Justin Theroux's 26-year-old brother for some reason caused quite the stir when he hung out in New York with his younger bro wearing matching leather jackets. The words "drool" and "hot" were used in various well-reported pieces.

Okay, okay. So this one has been on the Hollywood radar for quite some time. But listen—let's just give credit where credit is due. Kid's funny and a little more understandable with his "art" than James. Case closed.