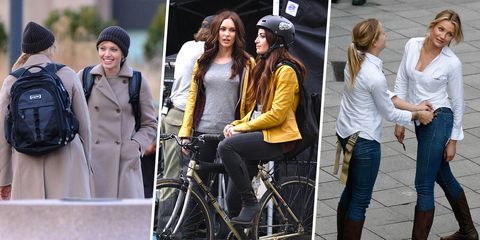 While plenty of celebrities do their own stunts, the Movie People™ aren't fooling anyone when they show, say, Betty White doing a series of backflips, then cutting away to a closeup of her face. That's where the doubles come in—and when you see them standing side by side with their principles, it's, well, a *lot*, as these photos show.

Sparks were flying on the set of Suicide Squad—out of the the motorcycle, that is.

Just two ladies playing a villain based on a certain "daughter from a dubious dynasty."

The first of many suspect wigs in this gallery, keep a lookout.

When you have to run into the East River (questionable), who you gonna call? Kachina Dechert, who did the hard physical work for a scene in The Angriest Man in Brooklyn.

THIS IS SCARING ME.

When you see someone wearing the same shirt as you. (And the same jeans, and the same hair, etc.)

Haha, thought the dudes in the foreground were doubles too.

If only you could hire a double to do your personal "running scenes" for you.

Chris Hemsworth isn't the only one in Avengers to get a double. Here's Olsen with hers filming in Edinburgh.

This is super sick and from the Power Rangers movie, in which Banks plays an antagonist named "Rita Repulsa," which is also super sick.

Probably about to burst through a wall or some such.

Did you know there are awards for stunt people? And that these awards shows have after-parties that Jennifer Garner and her double Shanna Duggins have attended in matching outfits? So fun!

Smiles on the set of Salt.

Diaz's double for Knight and Day *doubling* (I hate myself too) as a wardrobe assistant. Or she's making sure she doesn't fall out of her harness, that could be it.

And here, a still from Step Up 4: Spider-Man Expands His Horizons. JK, this is Andrew Garfield and William Spencer, one of his two doubles, rehearsing for for The Amazing Spider-Man 2.

When your stunt double looks a little too much like you.

Raise your hand if you think Caitlin Dechelle and Gal Gadot look like they could be related. Great casting, eh?

Next
13 Throwback Stars Who Freed the Nipple
Advertisement - Continue Reading Below
This content is created and maintained by a third party, and imported onto this page to help users provide their email addresses. You may be able to find more information about this and similar content at piano.io
More From Celebrity
Ryan's Mother's Day Tribute to Blake Is LOL
How Celebrities Are Celebrating Mother's Day 2021
Advertisement - Continue Reading Below
Queen Elizabeth Is Now Selling Beer and Gin
Meghan Markle Wore Carolina Herrera for Vax Live
Princess Charlotte, 6, Tells Everyone She's 16
Meghan Wore Diana's Favorite Watch for Vax Live
J.Lo Sang a Sweet Duet With Her Mom at Vax Live
Meghan Discussed Her Daughter in Vax Live Speech
Prince Harry Talks Digital Pandemic at Vax Live
Harry and Will Have Been Arguing for Months Now