Like so many, I watched in horror and sadness as neo-Nazis marched through Charlottesville, Virginia, in August. Gone are the days of white hoods with holes for eyes—they’ve been replaced by tiki-torch-wielding white men in khaki pants. To hear their chants that “Jews will not replace us!” is to hear the racial anxiety of being replaced in a country that is rapidly changing, demographically and politically. I worry for our future, and I’m terrified for our present. My great- grandmother was enslaved. My dad’s grand- parents survived the Holocaust. My mother was chased by the Klan. Will my children be chased by it, too?

"Now it’s time to come together and embark on the hard work of remaking America."

Thankfully, the assumption that racial terror and violence is behind us has been disrupted. In 2017, they are still part of the American fabric. Now it’s time to come together and embark on the hard work of remaking America.

The dark history these khaki-clad men seek to preserve is that of an America that did not live up to the promise of “liberty and justice for all.” Enslavement of African people and the fear of a changing economy were what tore this country into the Union and the Confederacy. The Confederacy sought to maintain slavery at all costs, and the states that joined it went so far as to secede from the United States, because their allegiance to racism and division was stronger than their allegiance to the promise of what America could be for everyone. Today, tiki torches came to protect and resurrect the legacy of slavery and segregation, of division and strife.

Were this really about the anxiety of a white working class passed over by the economy, we would have seen hundreds of thousands of disaffected white men marching on state capitols and the White House, demanding that state legislatures and Congress enact new policies that uplift Americans who are being left behind by an agenda that prioritizes profit over people. They would stand, not with tiki torches and guns, but instead with hands clasped with the millions of Americans who are also being left behind by the American Dream: women, people of color, LGBT people, immigrants, Muslims, and people with disabilities.

However, the murder of 32-year-old Heather Heyer and brutal beating of 20-year-old DeAndre Harris by white supremacists tell a very different story. For some, ignoring hate and hate groups seems the best way to defeat them. Yet what happens when we ignore support for that kind of violence at the highest levels of our government? While white nationalist groups may appear to represent a fringe element in our society, support for them by the president and some members of his administration gives them a platform, legitimacy, and protection. Protecting relics of the past as a way to preserve the contradictions of American culture is one thing. Protecting and supporting the ideals behind the Confederacy in our government and in our communities is another thing entirely. Unfortunately, some of our decision makers are living monuments to values that belong in museums, not in our White House. 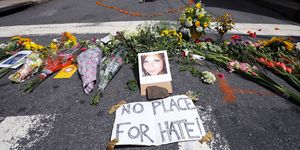 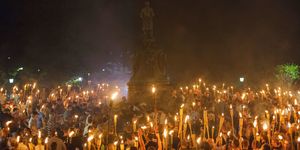 Charlottesville: A Reminder of Who We Really Are

More than Confederate flags and statues, these fights are about the future of our nation. They are about the laws that will govern our country. They are about how we identify the problems our country faces, and the solutions that we adopt to address them. They are about who is an American, and if we will, in fact, finally become the land of the free and the home of the brave. America could certainly benefit from some courage right now.

Few everyday citizens in Germany took seriously the rise of Hitler in the 1920s and 1930s. Many ignored or even supported his growing power and his troubling agenda until it gained steam and, more important, gained the authority of the state to enforce it. Hitler’s vision, combined with the legitimacy of the government, killed 6 million Jewish people and nearly 13 million other people who were deemed undesirable and at fault for the problems facing Germany: people with disabilities; Soviet, Polish, and Roma (Gypsy) people; LGBT people; Jehovah’s Witnesses; and people who were or had previously been incarcerated.

Historically, white nationalist groups in the U.S. have carried forward a similar strategy of racial violence and racial terror, particularly when faced with changing social conditions. During the Civil Rights Movement, the Ku Klux Klan and other white supremacist groups would march through communities where black people dared register to vote. In the dead of night, Klan members would throw firebombs through the windows of the homes of civil- rights organizers. They bombed churches that supported the movement, including, on the morning of September 15, 1963, the 16th Street Baptist Church in Birmingham, Alabama, where four girls—Cynthia Wesley, 14; Carole Robertson, 14; Addie Mae Collins, 14; and Denise McNair, 11—were killed just 11 days after a federal order was announced requiring the Alabama school system to integrate. Violence has always been used as a tool to discourage people from dismantling white supremacy.

"Violence has always been used as a tool to discourage people from dismantling white supremacy."

The protests and counterdemonstrations of the past few months represent the promise of an America that is not yet born, but could come sooner if each one of us recommitted to not taking it for granted. In August, in my Bay Area community in California, tens of thousands of people stood face-to-face with a dangerous trend spreading throughout America. My community stood up to hate in the form of white nationalists, and we won. In Charlottesville; in Boston; in Durham, North Carolina; in Phoenix; in San Francisco and in Berkeley, California, more than 2 million people collectively faced white nationalist organizations and won. We did not turn away. We showed them that we represent the promise of an America where everyone belongs, where we take care of one another and respect our differences, because our differences do, in fact, make us stronger.

When the marches are over, it is our duty as Americans to continue to oppose white supremacy wherever it manifests—in our city halls, in our workplaces, in our schools, in our places of worship, and certainly in our White House. I want to raise my children in a country that will never go back to that dark time in our history. If we are to be successful, this moment calls us to read between the lines. What is at stake is the America waiting to be born.

Marie Claire
This content is created and maintained by a third party, and imported onto this page to help users provide their email addresses. You may be able to find more information about this and similar content at piano.io
Advertisement - Continue Reading Below
More From Culture
Movies Everybody Should Watch At Least Once
'Bridgerton' Season 2: Everything We Know
Advertisement - Continue Reading Below
We're Getting a Season 4 of 'Manifest'
Here's When 'Succession' Season 3 Is Coming to HBO
The 18 Best Action Movies of 2021 (So Far)
Get to Know Nick From 'The Circle'
Porn Movies with Great Plots and Better Sex
'Bachelor In Paradise' Spoilers: Your 2021 Guide
'Bachelor In Paradise' 2021: Everything We Know
Michelle Young's 'Bachelorette' Cast