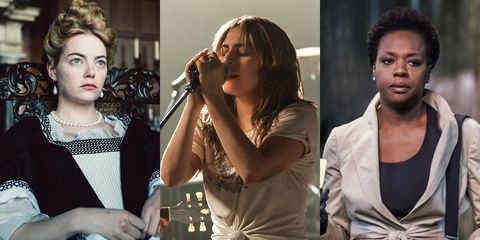 The best movies of 2018 couldn’t possibly be placed under an umbrella, but they did have one thing in common: We really needed them. Whether it be a muted drama, a surreal comedy, or a creepy horror flick, this was the year we needed somewhere to escape our own world for a few hours. And, boy, did we: Theater attendance reached record highs this year, and though the brief-but-glorious existence of MoviePass may have helped get butts in seats, the uptick seems more likely the result of a need for escape, for empathy, and for hope. And these movies delivered.

Below, in no particular order, is Marie Claire’s list of the best movies of 2018, a selection of the films that really stood out to our editors this year:

Why It Made the Cut: A beautiful, heartbreakingly familiar-looking gaze at early adulthood and all of its painful awkwardness. Kayla is all of us, even though she feels like she’s none of us (relatable!). Alhough it will make you cringe, it will also make you realize that, hey, maybe some things have gotten better.

Can You Ever Forgive Me?

Why It Made the Cut: It’s a funny but also surprisingly sad true story about author Lee Israel, who was caught forging letters by notable celebrities in order to make rent. That’s a great plot! But it goes a step further by also being a meditation on accidental isolation and the difficulty of breaking out of a loneliness spiral. Oh, and it’s the best thing Melissa McCarthy has ever done. Who knew?

Why It Made the Cut: A film about a preacher who suddenly realizes that climate change is a religious issue, too. With the stark climate reports that came out this year, watching Hawke’s tortured holyman work through what the end of the world might look like cut a little close to home. A brilliant sleeper film that you should see right now.

Why It Made the Cut: This deeply unsettling, female-fronted horror-thriller has some big ideas at its center, and it takes a great movie to articulate them without shoving them down your throat. The beauty and creeping horror of this movie will stick with you, even once you figure out the twist.

Why It Made the Cut: From Yornos Lanthimos, the visionary director of 2016’s surreal masterpiece The Lobster, comes this considerably more real-world but no less bizarre comedy about Queen Anne and the women who jockey for position in her court. Conniving and caustic, funny and lavishly shot—plus more than a little homoerotic! Emma Stone has never been better.

Why It Made the Cut: Lauded as one of the most terrifying movies in recent memories, the jump-scares and gross-outs are truly unpredictable in this horror masterpiece. It made a huge mark when it came out for elevating the level of horror to which a popular movie can aspire.

Why It Made the Cut: Not only is this the Marvel entry that you can enjoy without watching any other Marvel movies—a massive feat—but everything about Black Panther went above and beyond the confines of the much-maligned superhero flick. It gave us the beautiful world of Wakanda and strong women ruled. The politics it plays with aren’t subtle, but they're handled expertly: Even the Killmonger, though clearly evil, was sympathetic in his ideology. It broke the mold for these kinds of movies—here’s hoping it stays broken.

Why It Made the Cut: Everything our boy Timothée Chalamet touches turns to Oscar gold, and this meditation on what addiction does to a family—and just how deeply it affects everyone in its orbit—has already gotten nominations (Golden Globe and SAG) for both Chalamet’s and Carell’s striking, heartbreaking performances. It’s timely in that it shows just how easy it is for normal, well-brought-up people to fall into opioid addiction, pulling off the mask of what an addict looks like and reminding us why casting them aside ultimately helps no one.

Why It Made the Cut: Lightning-quick, beautiful-looking, and full of heart. And who doesn’t love claymation dogs and Wes Anderson? In a weak animation year, Isle of Dogs was above the pack.

Why It Made the Cut: Krasinski’s directorial debut, in which he also stars opposite his real-life wife, set up the stakes immediately: Don’t make a sound, or an unseen evil will get you. The world inside A Quiet Place is clear, even if the foe is not. Plus, who knew that a silent movie could be so damn scary?

Sorry to Bother You

Why It Made the Cut: This darkly funny, surrealist romp through a corporate wasteland has at its center commentaries on race, capitalism, and complacency versus fighting for what’s right—that is, it does if you can tear yourself away from its wild visuals, strange horse-headed people, and bizarro characters long enough to notice.

Why It Made the Cut: Because the news was bad, and we needed something nice to distract us for a couple hours. This schmaltzy, campy, Cher-filled island love fest provided the medicine we needed to make it through 2018.

Why It Made the Cut: It's Spike Lee's best movie since Do The Right Thing, and is as funny as it is timely.

Why It Made the Cut: Starring the first all-Asian cast in a non-period film since Joy Luck Club more than 20 years ago, this adaptation launched a thousand stories on why the rom-com is making a comeback. It was one of the biggest films of the year for very good reason.

The Night Is Short, Walk on Girl

Why It Made the Cut:: An inventive, funny, and soulful film from Japanese animation genius Masaaki Yuasa follows a young woman on the verge of adulthood who wants to experience everything Kyoto has to offer. It’s laugh-out-loud funny and offers a sweet message: We’re all connected in a million ways, if you take the time to notice.

A Star Is Born

I am so excited to star in my first movie alongside someone I'm so lucky to call my friend. I always wanted to be an actress on the big screen. The story of "A Star is Born" is so special and I'm so grateful to Bradley for making my dream come true. Can't wait for you to meet Ally. She has her first scene in 5....⏰

Why It Made the Cut: At once a coming out party for Gaga’s acting chops and a way for Bradley Cooper to show he Should Be Taken Seriously, this remake of a remake of a remake had no business being as good as it was. Gaga’s performance is genuinely thrilling to watch, and who knew Cooper could sing? If the movie wasn’t top of mind for most of the year for you, the soundtrack almost certainly was.

Why It Made the Cut: The heist movie was the last bastion of cinematic masculinity, so it’s refreshing to watch four women absolutely slay the form. This is one of those late-in-the-year action entries that was surprisingly better than we expected.

Related Story
The Best Books of 2018, According to Our Editors
Advertisement - Continue Reading Below
More From Unmissable Movies
Unmissable Horror Movies Coming Out This Year
The Best Romantic Films of the Year (So Far)
Advertisement - Continue Reading Below
The Documentaries You Can't Afford to Miss in 2020
Movies That Are Bringing the Drama in 2020
The Best New Bollywood Movies
The Most Exhilarating Thrillers of 2020 (So Far)
The Films That'll Have You Laughing Through 2020
The Sexiest Blockbusters Coming Out This Year
These Are the Most Anticipated Movies of 2020
The Best Crime Movies Ever Made