The first official trailer for Ocean's 8 is here! After a rousing teaser featuring everyone from Sandra Bullock, to Anne Hathaway, to Cate Blanchett, to Mindy Kaling, to Sarah Paulson, to James Corden, to freaking Rihanna, Warner Brothers has gifted the world with a two minute look at what this all-female sequel has in store. And it's freaking epic.

What we're getting from the trailer is that Mindy plays a faux jewelry designer, Rihanna is a hacker named EIGHT BALL (I'm screaming), Sandra and Cate are running the con, and Anne Hathaway plays their target—an actress attending New York City's annual Met Gala.

The movie features a ton of celeb cameos (over 20!) including Kim Kardashian, Kendall Jenner, Katie Holmes, and Olivia Munn—though Taylor Swift gets a verbal shout out in the trailer, so look out for her as well.

By the way, Sandra Bullock plays the sister of George Clooney’s Danny Ocean, and apparently Danny is dead during Ocean's 8—at least based on footage the trailer shows of Sandra's character sitting in front of a memorial plaque for her brother. RIP, etc. 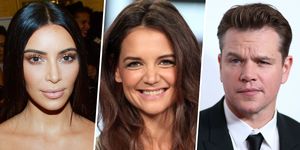 All the Celebs Making Cameos in 'Ocean's 8' 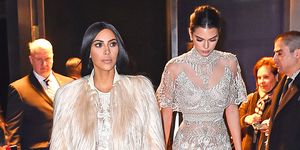 Kim and Kendall Were Spotted on Set of 'Ocean's 8' 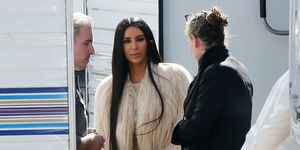 Kim Kardashian Is Back on the Set of 'Ocean's'
Rachel Epstein Associate Digital Editor Rachel Epstein is the associate editor at MarieClaire.com, where she covers celeb and royals news, culture, lifestyle, and politics.
Advertisement - Continue Reading Below
More From Culture
'Good Girls' Is Back for an Explosive Season 3
Netflix's 'Haunting of Hill House' Will Return
Advertisement - Continue Reading Below
Criminal Minds Season 15 Will Be Its Last
The Hot New Podcasts to Add to Your Queue
Who Are the Women of 'The Bachelor' in 2020?
Join Marie Claire's Virtual Monthly Book Club