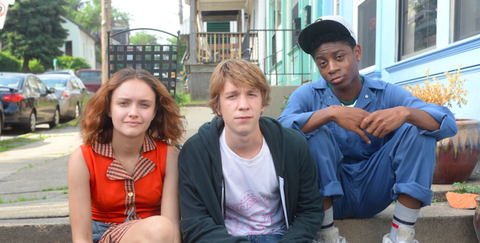 Occasionally, the indie film industry fights its way through the mega studio blockbusters and grabs attention for a truly original movie that punches you right in the heart. The last decade has given us Little Miss Sunshine, Juno, My Big Fat Greek Wedding...and if I have my way, this month's Me and Earl and the Dying Girl will join their hallowed ranks.

Me and Earl is the story of three teens grappling with terminal cancer and the true meaning of friendship and intimacy—so yes, it's another teens-with-cancer movie, but it's so much more than that. Here's why.

The Refusal to Give in to Clichés

Every trope of the teen movie is here, but turned on its head. The boys aren't your typical unpopular, bullied misfits; instead they drift among groups without feeling particularly compelled by anyone. They're best friends, but call each other coworkers. They love the girl, but not romantically. Greg acknowledges that just once, when they lock eyes toward the beginning and he wonders if this is the moment they'll be "suddenly, furiously making out with the fire of a thousand suns." But then...no.

The three young people featured in this film are gifted in a wonderfully unshowy way. There's Thomas Mann as Greg (the "me" of the movie's title), who nails the portrayal of a drifting, preoccupied, uncomfortable boy who occasionally explodes with hormonal rage. RJ Cyler is a newcomer who plays the hilariously honest and deadpan best friend, Earl. And Olivia Cooke (of Bates Motel fame) is the dying girl, with a bald head that magnifies her giant, sad eyes.

And then, of course, there are their parents. Connie Britton plays a bleeding-heart hippie mom, while Nick Offerman is her muumuu-wearing, academic husband. They're just total weirdos and it's a delight. Molly Shannon somehow makes it funny to play the mother of a cancer kid—she's tipsy and weepy on pinot grigio the entire time.

The Director's Obvious Connection to the Material

Over the course of his career, Alfonso Gomez-Rejon has worked alongside film legends like Martin Scorsese, Robert DeNiro, Alejandro González Iñárritu, and Nora Ephron. He lost his mentor Ephron in 2012, and then his father in 2013, and says the Me and Earl script helped him cope.

"I felt this nagging feeling to say something more personal," Gomez-Rejon told the Sundance Institute. "I started reading the script and I became very engaged because of the humor. It's so honest and so funny. It was very comforting because it reminded me of those great John Hughes films I grew up on."

The Charming and Surprising Ode to Movie Magic

Greg and Earl pass their languid teen years making movies—specifically, stop-motion shorts that parody classic films. Imagine, say, A Sockwork Orange (with sock puppets), or Raging Bullshit, or 2:48pm Cowboy. We as the audience get regular peeks into these quirky, beautiful little films, and they serve as both eye candy and insight. It's refreshing to see teenagers portrayed this way—they're not smoking weed and listening to garage bands; they're critiquing the work of Werner Herzog.

A little thinking, a little laughing, a little weeping, a little reminder of how much your friends inform and complete your life—that appears to be the recipe for this year's biggest indie hit.

Take a break from all that CGI and track down a showing of Me and Earl, out now. Punch to the heart guaranteed.